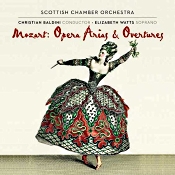 As we have come to expect from Linn Records, every new release is a welcome pleasure. This album of Mozart arias and overtures is no exception, especially as the performers do so well and the recording sounds so good.

However, most recordings these days seem to need something beyond good performances and good sound, so the added attraction here is the choice of material. Not content with merely providing an arbitrary selection of Mozart arias and overtures, Maestro Christian Baldini, soprano Elizabeth Watts, and the Scottish Chamber Orchestra have chosen to give us one or two arias and the overture from each of six Mozart operas. Thus, the program gives us a better idea of the flavor of the operas represented than just some random assortment of things.

There is plenty of zest, spunk, in Maestro Baldini's overture readings, although I'm not he captures all of Mozart's charm or drama along the way. Things seem to zip along merrily enough yet without quite the expansiveness that might have made the music even more delightful (or in the case of Don Giovanni, more melodramatic). Moreover, Baldini appears to get quicker as he moves from one overture to the next, the final selections a touch more taxing than they are exuberant. Still, these are quite exciting interpretations, and one cannot deny the conductor's energy and enthusiasm.

On the other hand, Baldini and soprano Elizabeth Watts handle the arias exquisitely. Ms. Watts possesses a fine, expressive voice, and she isn't shy about using it to its fullest extent, from softest and gentlest to loudest and most-explosive expressions.

I also loved the precision and poise of the Scottish Chamber Orchestra, who never fail to impress me with their devotion to the music. They appear to respond to conductor Baldini's every direction.

There is a good sense of depth to the sound, noticeable from the opening bell. There's also a strong dynamic range and punch to the music, which lend to the album's overall lifelike quality. But you knew that going in, given that it's a Linn recording. The midrange sounds nicely detailed without being bright or hard; the highs show a reasonable sparkle; and the lows are commendably solid. A small degree of hall ambience adds to the illusion of reality.