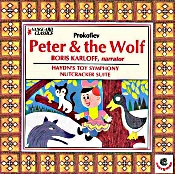 Russian composer and conductor Sergei Prokofiev (1891-1953) wrote Peter and the Wolf in 1936 on a commission from the Central Children's Theatre in Moscow. The work did not get a very enthusiastic reception at the time of its premiere but, of course, eventually became a mainstay of the classical field to the delight of children and adults everywhere. The story comprises a narrator and orchestral accompaniment, the various instruments of the orchestra portraying the characters, human and animal, in the tale. Soviet censors of the day didn't quite know what to make of it, most of them accepting it as a simple fairy tale, others viewing it as a political allegory for the state of affairs in the Soviet Union. Whatever, it's still fun.

Over the years, there have been a slew of Peter and the Wolf recordings worth recommending, almost all of them featuring celebrated narrators. The ones I've been living with longest are those by Sir Ralph Richardson, Sean Connery, and Sir John Gielgud, but I've also heard ones narrated by Andre Previn, Michael Flanders, Bob Keeshan ("Captain Kangaroo"), David Attenborough, Ben Kingsley, Patrick Stewart, Sophia Loren, Christopher Lee, Peter Ustinov, Beatrice Lillie, Alec Guinness, Basil Rathbone, even Arthur Godfrey. But this recording was the first time I had heard Boris Karloff doing the storytelling, and I didn't know quite what to expect. The Frankenstein monster, I suppose. Vanguard had recorded it back in 1957, a few years before Karloff started hosting his TV series Thriller. I should have remembered how good a speaking voice he had because when he starts to tell us about the various musical instruments and then Peter's story, he fascinated and then mesmerized me.

Karloff provides as dramatic reading as probably any other narrator I've heard, shading and embellishing every word and syllable to create a tale that's genuinely interesting to follow no matter how many times you've heard it before. And his voice doesn't just sound menacing, as you might expect. It's gentle, kindly, and persuasive. The whole thing is a positive delight.

The sound of the Vienna State Opera Orchestra is also quite good, maybe not so clean as the Telarc recording for Previn but open and full, with a good sense of high-end presence and a reasonably quiet background. Maestro Mario Rossi's interpretation of the music matches Karloff's narrative charm, the orchestral parts being very broad and theatrical. I had a good time, and would hope that most listeners would have as good a time with the piece as Karloff and the musicians appeared to be having performing it.

But that's not all. Vanguard rounded out the disc with two equally impressive old war horses: Leopold Mozart's delightfully juvenile joke, The Toy Symphony, sometimes still referred to as "Haydn's Toy Symphony" since people originally thought Haydn had written it. Now we know better. Antonio Janigro and his I Solisti de Zagreb compatriots play it with zesty enthusiasm, and the 1958 stereo sound comes up sparkling.

Concluding the program we get Maurice Abravanel and his Utah Symphony in a few excerpts from Tchaikovsky's Nutcracker, also sparkling, although the 1961 sound here is a bit brighter and thinner than that of the previous two selections. In all, however, a fine collection at a reasonable price.