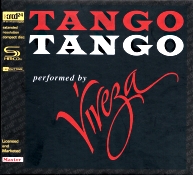 Given the number of movies featuring or about the tango, the documentaries, and the slew of record albums in recent years devoted to the subject, I think it’s safe to say the tango is back. Or maybe it was never gone. Moreover, after listening for the last couple of years to a goodly number of CDs devoted to the material, it is this album, Tango Tango by Viveza, originally released by Omega Records in 1998, that I have enjoyed most of all. So it’s a double pleasure to welcome it back on a 2013 audiophile remastering from Master Music.

First of all, the program contains some of the best all-around tango tunes I’ve heard performed, starting with the most popular tango of them, Jacob Gade’s “Jalousie” and followed by my own personal favorites, the hauntingly beautiful “Tango in D” by Isaac Albeniz and the equally enchanting “Por Una Cabeza” by Carlos Gardel (think Scent of a Woman or the ending of True Lies with Arnold Schwarzenegger and Jamie Lee Curtis dancing to it through the closing credits).

The other dozen or so tangos cover the ground with representative works from the turn-of-the-century to compositions of more modern origin, with those aimed at purely commercial success to those by classical artists; with dances from Europe, Argentina, and America; and, of course, with pieces by the Grand Master of the tango, Astor Piazzolla, whose tunes include "Allegro Tangabile," "5 Ano Nacional," "Fin de curso," "El Goy," "4. El Boletin," and "Aplazado." These tangos are not only rhythmic and danceable, they're appropriately romantic, swaggering, haunting, sensuous, yet nostalgic. In addition to the numbers I've mentioned, we find Bernardo Stalman's "Viejas Ideas," Franz Grothe's "Shreib mir einen Brief," Bill Runge's "Astor," E. Fernandez-Arboz's "Tango," Russell Guyver's "Un Crimen Pasional," Danny Gould's "Dango's Tango," Eduardo Oscar Rovira's "A Evaristo Carriego," and Igor Stravinsky's "Tango."

As important as the material is, the small group of Canadian musicians known as Viveza (Spanish for “lively” or “vivacious”) play the tunes with an understated style that does them all proud. The ensemble comprises Gwen Thompson, violin, viola, and guiro; Robert Holliston, guitar and piano; Mark Koenig, violin, viola, and melodeon; Wilmer Fawcett, double bass and guitar; with special guest artiest Salvador Ferreras, percussion.

How good are these musicians? Ms. Thompson began her professional career in 1971 with a dual appointment as Professor of Violin at the University of Western Ontario and Concertmaster of Orchestra London. She was head of the String Department of the Vancouver Academy of Music for twenty-five years, as well as holding a teaching position at the University of British Columbia. Wilmer Fawcett recently retired as Principal Bassist with the CBC Vancouver Orchestra and Associate Principal with the Vancouver Symphony Orchestra. Robert Holliston is the host of the Victoria Conservatory of Music's “Brown Bag Lunch” series. Also an active performer, he is currently Head of Collaborative Piano Studies at the Victoria Conservatory of Music, where he also teaches piano and music history. Salvador Ferreras frequents national radio as host and commentator. Mark Koenig passed away in 2006. 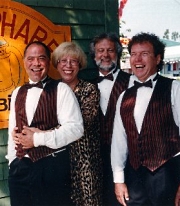 Yes, they are more than your average band. Their performances are certainly vivacious, but in a tasteful and restrained way.

Also of importance, the digital sound is smooth and natural, with the instruments well defined. In other words, the disc is wholly engaging on all levels. Rick Kilburn recorded it for XNTRiK Productions at the Western Front, Vancouver, BC in April 1998, and Master Music Ltd. remastered it in 2013. They transferred the sound from the master tapes to disc using 24-bit XRCD technology, the SHM-CD utilizing a polycarbonate resin substrate, and HR cutting. It all adds up to a superb rendering of the original sound.

Having the original Omega CD on hand for comparison helped me to determine the worth of the new Master Music edition. We take for granted these days that audiophile remasters in general show improvements, to one degree or another, in clarity, definition, smoothness, dynamics, even frequency range. What the Master Music iteration of Tango Tango also does is improve the music's dimensionality, its air and space and sense of depth. The instruments seem more fully separate from one another. Certainly, the added midrange transparency helps a lot in this regard, as does the extended treble and added bass tautness. To be sure, these differences are not night-and-day, and except on direct comparison one might not even notice them. Still, they all contribute to the recording's sense of realism and, thus, to the listener's enjoyment.