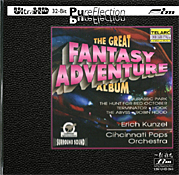 Here’s Erich Kunzel (1935-2009) and his Cincinnati Pops Orchestra doing what they did best, presenting an album of short clips from famous fantasy and adventure movies. Kunzel sold a ton of this stuff, making him one of the best-selling conductors of all time. Telarc originally issued the disc in the early Nineties and the audiophile label LIM (Lasting Impression Music, a subsidiary of FIM, First Impression Music) remastered and released it in 2013. For the kind of thing it is, it’s pretty good.

Maestro Kunzel knew exactly what his listeners wanted and gave it to them, producing over ninety albums of short classical, jazz, and pop-orchestral material for Telarc Records alone. One wonders how he might have fared had he applied himself more often to longer classical works, but we have what we have. In the case of the present album, its presumably tongue-in-cheek title tells it all: The Great Fantasy Adventure Album. Well, maybe not quite all because a lot of what audiences might have considered “great” in 1993-94 we hardly remember today. For instance, can you even recall much about Kevin Costner’s Robin Hood:  Prince of Thieves, let alone its theme music? And although I consider myself a fairly well-informed movie and TV guy, I had trouble placing a short-lived television show called Wizards and Warriors. Nevertheless, there are a few choice items on the program that make the project worthwhile, Kunzel throws himself into the music with enthusiasm (if not always with the best results), and there’s no denying the fine quality of FIM’s remastered Telarc sound.

While much of the music is bombastic and, frankly, noisy, we probably wouldn't want our movie music any other way. The first few things on the program, for instance, are rather blustery affairs: Miklos Rozsa's El Cid "Fanfare and Entry of the Nobles," James Horner's Willow, Lawrence Rosenthal's Clash of the Titans, and John Williams's main themes for Hook seem equally inflated. Yet there are truly inspiring moments on the disc as well, Williams's music for Jurassic Park being one of the best scores he wrote.

And so it goes through twenty-one selections, a few of them purely sound effects, like a dinosaur tromping around and cyber technology ("T-Rex," "Jurassic Lunch," "Cybergenesis"). Among my favorite musical items: selections from The Seventh Voyage of Sinbad, Henry V, The Rocketeer, Beetlejuice, The Princess Bride, The Hunt for Red October, and The Terminator. 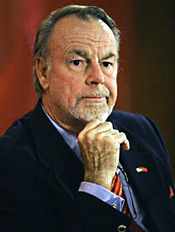 Whether you find yourself attuned to Maestro Kunzel's handling of the themes is another story, though. He's certainly more than competent, but inspired? I dunno. Like you, I vividly recall that moment in Jurassic Park when we first saw those amazing CGI dinosaurs on the big screen, Williams's music soaring in the background in glorious Dolby Surround. Today, we take such matters for granted, but back then it was all quite astounding. Maybe it’s the passage of time that has blunted Kunzel's rendition; it doesn't seem to have the same impact I remember from Williams's own interpretation.

Telarc producer Robert Woods and audio engineers Jack Renner and Michael Bishop recorded the album in 1993-94 at Music Hall, Cincinnati, Ohio, and LIM producer Winston Ma and mastering engineer Michael Bishop remastered the tapes in 2013. Yes, Mr. Bishop had the chance to do up his own project utilizing even better mastering methods and equipment and rereleasing the disc using even better transfer technology. The sound is big and bold, like the music, so everything works out well. Telarc's famous bass drum gets an expected workout, and the dynamic range shows off the various special aural effects pretty well. However, even remastered with meticulous care using FIM's UltraHD 32-bit "PureFlection" processing, there's a small degree of upper midrange forwardness I noticed in some tracks, as well as a small degree of thickness around the middle. Still, it's negligible, and I don't think anyone will care. Best of all for me was the newly minted high end, which sparkles, shimmers, and shines.

As always, LIM provide packaging worthy of the product (and its dear price): a glossy, hard-cardboard, Digipak-type folding case; an inner sleeve for the disc, with a static-proof liner; and a bound booklet of notes on the music and its production.