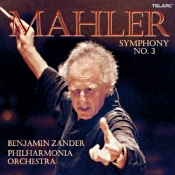 This is about as enjoyable a performance of Mahler’s Third, his “Nature” symphony, as any I’ve heard in a long time, and the engineers at Telarc have recorded it as realistically as any around. In a package that offers three discs for the price of one, it’s a hard deal to beat.


I have to admit, though, that beyond the first movement here, I don’t find Mahler’s inspiration as compelling as a lot of other people do. Anyway, the first thing I did after listening to this massive symphony--all six movements and over 100 minutes of it, one of Mahler’s longest works--was to compare it to my one of my favorite interpretations, that of Jascha Horenstein and the London Symphony Orchestra on Unicorn, recorded some thirty years earlier.


Two things struck me: One, the older recording still sounded good. Not as good as the new Telarc, mind you, but well in the ballpark. The Horenstein seemed a tad brighter, slightly less well detailed, and lighter in the bass. The Zander seemed more naturally balanced, with slightly greater depth and impact, and, of course, that famous Telarc low end. But there were times when the top end of the Telarc appeared jarringly out of place, whereas in the same sections the Unicorn was smoother. Still and all, I’d go with the Telarc for ultimate sonic realism. 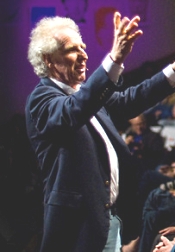 Second, the Zander reading is nearly the same length as the Horenstein in most of the movements, yet overall it seems marginally slower and in a few sections blander. I suspect this is because to my ears Horenstein puts a fraction more intensity into every phrase and every note. The exception is Zander’s handling of the second movement, which seems more animated than the rest of the performance. The result is just that much more involving than with other conductors. The other exceptions of concern are the huge first movement, which tends to amble along, and the fourth movement, marked Misterioso, which Zander takes considerably slower than Horenstein. As a consequence, Zander’s readings of these sections seem a tad less gripping than they should be, even though he does add perhaps a touch more atmosphere to things.

Nevertheless, these are minor issues in a rendition that is otherwise well structured, with a strong command of Mahler’s dynamic and emotional contrasts. As important, the singing is first-rate and that alone should sell the interpretation as much as anything else. Otherwise, some listeners may find Zander’s overall approach subtle and expressive while others may see it as somewhat deliberate.


The huge first movement, almost thirty-four minutes long, takes up the first disc; movements two through six are on the second disc; and Zander’s usual commentary is on the third disc. I didn’t have time to listen to the entirety of the Zander’s comments, but as expected in the part I did listen to the conductor is erudite and informative, and his lecture fascinating to hear. As I say, the whole thing is a hard bargain to overlook.


To hear a moment from each of the movements, click here: