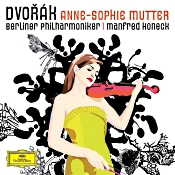 Although Dvorak’s Violin Concerto long ago took its place in the basic classical repertoire, it has never quite caught on with the public the way those from Bach, Mozart, Beethoven, Mendelssohn, Paganini, Brahms, Tchaikovsky, and the rest have caught on. The Dvorak hasn’t quite the soaring lines, memorable melodies, and grand Romantic gestures we find in other popular concertos. Still, it offers its fair share of pleasures, and certainly this new recording from violinist Anne-Sophie Mutter and the Berlin Philharmonic makes the most of them.

Czech composer Antonin Dvorak (1841-1904) wrote his Concerto for Violin and Orchestra in A minor, Op. 53 in 1879, premiering it in 1883. The famous Hungarian violinist, conductor, composer and teacher Joseph Joachim inspired Dvorak to write the piece, and the composer intended for Joachim to play it. As it turned out, Joachim didn’t much care for the finished work and never did perform it. Despite the violinist’s skepticism, Dvorak released the piece, and the rest is history, as they say. I dunno, though. Maybe Joachim had something; the music has never impressed me as much as the other staple items above have, even in the capable hands of Ms. Mutter. Indeed, the back cover announces that the Dvorak is “the last of the great Romantic concertos to enter Ms. Mutter’s discography,” and I wonder if there isn’t a reason for that.

Anyway, Dvorak begins the concerto with an Allegro ma non troppo (fast, but not too much), the "ma non troppo" marking used in all three movements. The violin enters almost immediately, and Ms. Mutter caresses the opening passages most tenderly, while still imparting a desired grandeur to the music. Joachim may have felt that the orchestra dominated the score, but Dvorak made some revisions before premiering it, and certainly in this interpretation, Maestro Honeck and his Berlin players share the spotlight equally with the violinist, never overwhelming her. If anything, it is Ms. Mutter's commanding execution of the music that tends to control the reading. The performance is tender, lilting, singing, rhapsodic, and a touch melancholic in every phrase.

The slow central movement, the Adagio ma non troppo, is the emotional heart of the work. Again, Dvorak's marking indicates he didn't want the soloist or orchestra to take things too slowly, possibly not to make the music too sentimental. Nevertheless, while Ms. Mutter does tend to stretch it out a bit more than usual, she never loses sight of the music's emotional grip. Even at a marginally slower pace than some other violinists have approached it, she is well able to communicate the movement's pensive yearning. 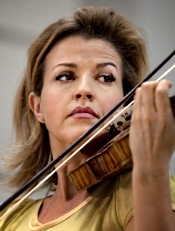 In the Finale Dvorak returns to the radiant, dance-like tunes of the opening movement, and Ms. Mutter shines accordingly. She has a good feel for Dvorak's Bohemian roots, and her violin skips along merrily. It's a delight, and along with Perlman (EMI) we must now count it among the best recorded performances of the work available.

The combination of one of the world's leading violinists with one of the world's greatest orchestras results in a world-class set of performances that one can hardly fault. Both Ms. Mutter and the Berlin Philharmonic play gloriously.

The program concludes with a brief piece for violin and piano accompaniment, the familiar Humoresque, Op. 101, No. 7. Ms. Mutter's inflections provide it with a memorable scope, making it a fitting ending to a noteworthy album.

Producer Arend Prohmann and engineer Stephan Flock recorded the album at the Philharmonie (Concerto, Romance, Mazurek) and Meistersaal (Humoresque), Berlin in June 2013. It's amazing how good an orchestra can sound when it's freed from the constraints of a live recording. The Berlin Philharmonic is a magnificent ensemble, but too often producers have felt it necessary to record them live, with all the consequent shortcomings that technique implies. Here, we get a big, full, warm sound, slightly close up but not overbearingly so. With an enormous dynamic range, a strong impact, and a wide frequency response, the resultant sound is very impressive, rather like being in the sixth or seventh row of the concert hall itself. The violin also sounds good, with a most-realistic string tone. It's good to hear the Berliners in all their glory again, especially when the recording engineer so well integrated the soloist into the occasion.