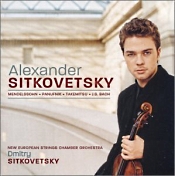 I assumed from their names and from the cover picture that young Russian violinist Alexander Sitkovesky and Russian conductor and violinist Dmitry Sitkovetsky were father and son, but nothing that I could find in the booklet notes indicated their relationship. It turns out, Dmitry is Alexander’s uncle. Be that as it may, they make a smooth and agreeable team as soloist and conductor and in the Bach as co-violinists.


Unfortunately, I did not find their repertoire particularly well suited to my taste. The Mendelssohn is not the familiar Violin Concerto in E minor but the D minor Concerto the composer wrote when he was thirteen. Nobody ever performed it in Mendelssohn’s own day, and it was only in 1952 that Yehudi Menuhin exhumed and premiered it. Later, Menuhin took the young Alexander Sitkovesky under his wing, making him one of his protégés so to speak, and I’m sure it’s no coincidence why Sitkovesky chose the work for inclusion here, no doubt as a tribute to his mentor. In any case, there are reasons why most of us have not heard some pieces of music, and while one may find parts of the D-minor Concerto interesting, the jaunty final movement, for instance, which Sitkovesky plays with much enthusiasm, overall it does not strike me as among the composer’s strongest works no matter how well played. And well played it is, as are all the selections on the disc. Sitkovesky is a most-subtle and expressive performer, and it’s a pity we haven’t heard more from him.


Of greater interest is the Violin Concerto of Andrzej Panufnik (1914-1991), which displays more rhythmic vitality and more originality than the first work, albeit in an entirely different, more-modern style. Sitkovesky plays it with a feeling for its bouncy cadences and various mood swings. Again, the piece seems a tribute to Menuhin, as it was the older violinist who first performed it in 1972. 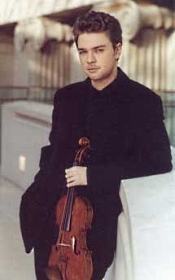 Following the Panufnik is a single-movement work called “Nostalghia” by Japanese composer Toru Takemitsu (1930-1996). He dedicated it to the memory of Russian film director Andrei Tarkovsky, and as such he marked it “calm and mournful.” Emphasize the last word. It is almost funereal and while quite lovely in most regards, it may put some folks to sleep.


Following this we find both Sitkoveskys performing Bach’s Concerto for Two Violins, also at a rather slow pace. Maybe they were in a mood to demonstrate their serious, contemplative side. Or perhaps after my having listened to a recording of it by Hillary Hahn on DG just a few weeks earlier and being mightily impressed, the Sitkoveskys’ rendition was, though exceedingly smooth and well executed, something of a disappointment.


EMI’s sound is hardly a disappointment, though. It is extremely natural, ultra-suave, warm, well balanced, and remarkably lifelike. If there had been more on the disc that I enjoyed listening to, I would probably recommend it without hesitation. As it is, I have some hesitations. And maybe the buying public did, too, as I have not been able to locate another recording by Alexander Sitkovesky since he released this album almost a decade ago. Which, as I mentioned above, is unfortunate. He’s quite talented.