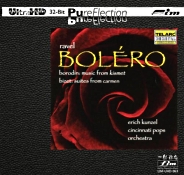 Released in 2008, Telarc’s Bolero was one of the last recordings Erich Kunzel made before his death in 2009. I read someplace that Kunzel had by that time become the number-one most-recorded conductor in the world. Today, he’s undoubtedly got as many Telarc recordings to his credit as most conductors have compiled in a lifetime. Now the folks at the audiophile company FIM have remastered the Bolero album using their UltraHD 32-bit mastering process, making the sound better than ever. If you’re a fan of Maestro Kunzel, you might find the disc of interest, despite its heady price tag.


Kunzel dedicated the Bolero album to the music of Spain, though mostly written by Frenchmen. The program starts with Maurice Ravel’s celebrated piece, yet it is, for me, the least-effective reading on the disc. Ravel once said that his Bolero should take about seventeen minutes to get through; Kunzel does it up in just over thirteen minutes. I have to admit that in Kunzel’s last few Telarc recordings with the Cincinnati Pops, he seemed less than animated, but I wasn’t expecting him to fly through the Bolero quite so quickly. It may sound a bit more exhilarating than most other interpretations, but it robs the music of its sensual qualities. Plus, there was one moment in it that made me laugh out loud, something I doubt Ravel intended.


Next, Kunzel does a medley of excerpts from the music of Alexander Borodin, music that Telarc proudly announce as “popularized in the musical Kismet.” I’m not sure if Telarc or Kunzel realize that most listeners today probably no more recognize this fifty-odd-year-old musical than they recognize the name Borodin itself. In any case, we get passages from the Symphony No. 2, “In the Steppes of Central Asia,” the String Quartet No. 2, the Symphony No. 1, and the Overture and “Polovtsean Dances” from Prince Igor. Kunzel handles them in a somewhat perfunctory style.


The best section of the album, however, contains music from Georges Bizet’s Carmen Suites Nos. 1 and 2, which come off quite well--dramatic and voluptuous, exciting and sensitive in all the right places. You might want to consider the disc for these two suites alone. Then things finish up with Isaac Albeniz’s “Fete-dieu a Seville” from Iberia, which seems a bit anticlimactic after all the Carmen music, but it’s OK. 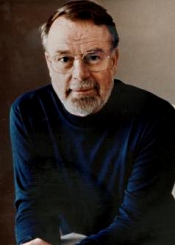 Producer Robert Woods and engineer Robert Friedrich recorded the album for Telarc in 2007 at Cincinnati Music Hall, Cincinnati, Ohio. Mr. Friedrich and FIM producer Winston Ma remastered the disc in 2013, using FIM's Ultra High Definition 32-bit mastering and PureFlection replicating processes. The "PureFlection" business is an indication of FIM's intent to reproduce on disc as nearly as possible what is on a master tape, a "pure reflection" of the original.


Understand, I still think the sound of the standard-issue Telarc is pretty good, but one of the things I noted in my review of it a few years back was a bit of dulling at the high end, making the sound appear smoother and warmer than what we might hear live. No such dulling here, though, where the highs glisten. The FIM product also seems to increase the sense of orchestral depth in the recording, while tightening up most of the transients. The response is marginally tauter, cleaner, and, therefore, clearer throughout the frequency range, with slightly improved dynamics and the usual robust bass.  In other words, FIM have made already good sonics even better, and the results are among the best I've heard, a genuine audiophile disc.


However, whether you think FIM's sound is worth the higher price (over twice the cost of the Telarc) is, of course, another story. Only buyers themselves can decide what's worth it for them. For audiophiles with excellent playback equipment, deep pockets, and a love for the music making of Maestro Erich Kunzel, it's probably well worth the extra money. For most other people, maybe not.


Commensurate with the dear cost of an audiophile product, the packaging bespeaks of the higher price. The disc comes packaged in a glossy, hardbound Digipak-type case, with a sixteen-page booklet bound to the inside, and an inner sleeve and additional static-proof envelope for the disc. It's a classy affair.