Here are two Christmas albums that are poles apart musically, instrumentally, and stylistically. Yet they’re both beautifully presented and remarkably entertaining. 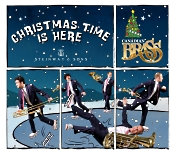 Canadian Brass have been tooting their horns for over forty years, and it’s hard to argue with their enthusiastic and virtuosic musicianship. The membership changes occasionally, and with Christmas Time Is Here the lineup includes Eric Reed on horn, Christopher Coletti and Caleb Hudson on trumpets, Achilles Liarmakopoulos on trombone, and Chuck Daellenbach on tuba, with Bill Cahn, percussion. No matter who’s in the group, though, they always sound as though they’ve been performing together forever, they sound so well integrated.

This time out they give us their renditions of eighteen selections made famous in the Charlie Brown Christmas specials, mostly tunes by the late, great jazzman Vince Guaraldi as well as other, more-traditional numbers arranged by Brandon Ridenour. The thing is, the performers in the original cartoons played most of these songs on solo piano or in small, quiet ensembles. How would they translate as performed by a group of brass instruments? The answer: Pretty well.

Not that you won’t have to do a little getting used to them. Each of the numbers conveys a sweet, Charlie Brown Christmas mood, even if the brass players can't entirely communicate the same intimacy of the Vince Guaraldi Trio. There are limits on what their instruments can do. Nevertheless, if you enjoy Canadian Brass, you know they can handle just about any genre, and the album is fun. Look for familiar tunes like "Christmas Is Coming," "O Tannenbaum," "My Little Drum," "Christmas Time Is Here," "Fur Elise," "The Christmas Song," "Rudolph the Red-Nosed Reindeer," "Frosty the Snowman," "Hark! The Herald Angels Sing," and many more.

Steinway & Sons, ArkivMusic, and Opening Day Entertainment Group produced the album in 2013 at the Coalition Music Studio, Toronto, Canada. It’s good studio sound, clear and dynamic. There isn't a lot of air around the instruments, though, just a soft, warm glow on the notes. It's comfortable sound, just clean enough to catch and hold one’s attention without being actually in the audiophile category of ultimate transparency. It comes across quite real, though, natural, helping the instruments to appear pretty much as they probably would live. 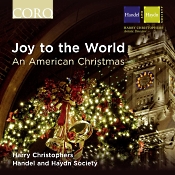 For those readers who may not know, the Handel and Haydn Society Period Instrument Orchestra and Chorus have been around since 1815, the second-oldest musical organization in the U.S. and the country’s oldest continuously performing-arts organization. Harry Christophers has been the Music Director since 2009. They specialize in historically informed performances, and on Joy to the World: An American Christmas they present nineteen mostly traditional carols in as close to their original renditions as possible.

Mr. Christophers tells us his aim was to offer up a survey of some of the most-popular Christmas carols sung in the U.S. The choir certainly presents them in exemplary fashion, their enunciation, phrasing, and emotional range immaculate. What's more, a thoroughly enjoyable and informative set of booklet notes tells us everything we'd probably ever want to know about the origins of each of the songs.

Among the items included we find "I Wonder as I Wander," "O Magnum Mysterium," "Joy to the World," "A Christmas Carol," "O Little Town of Bethlehem" (in two versions), "In Dulci Jubilo," "Angels We Have Heard on High," "It Came Upon the Midnight Clear," "Carol of the Bells," and many more.

The Sixteen Productions and CORO Records made the album at WGBH Classical New England Performance Studio, Boston, Massachusetts, in January 2012. Here we have what sounds like a pretty accurate account of real musicians in a real space. The light reflective conditions of the acoustic provide just the right amount of resonance to replicate a lifelike ambience. The voices remain smooth and warm, just as they would if listening to them in person, with no undue brightness or hardness. There is also a wide dynamic range involved, so the voices can swell from a softest whisper to a towering crescendo. Very nice all the way around.