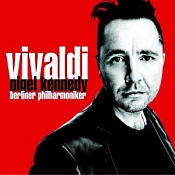 Quoting from a booklet note, “No living musician has done more to revitalize Antonio Vivaldi’s status than Nigel Kennedy--who has brought unimaginable sales of his work to every corner of the world.” Certainly, Mr. Kennedy sold a lot of CD’s of his earlier Four Seasons, but to hear the PR department talk, you’d think nobody else had ever recorded the piece. It is this kind of hyperbole that permeates the entire album.

Where before he had the English Chamber Orchestra to accompany him, Kennedy this time had members of the Berlin Philharmonic behind him, and apparently starting with this Four Seasons from 2004 they intended to record as much Vivaldi as the public could stand. However, I guess it was such a daunting enterprise, the public soon found itself exhausted with Vivaldi overload, and to my knowledge Kennedy and the Berlin players produced only one other Vivaldi album, called Vivaldi II.

In any case, Kennedy is a magnificent violinist with a bravura talent, which, unfortunately, sometimes gets in the way of the music. Listeners to these Four Seasons interpretations will find them either delightfully fanciful and innovative or annoyingly self-conscious. I’m afraid I’m in the latter group.  Kennedy invests each movement with so many subjective trills and frills and stops and changes of tempo that one feels the head spinning. Some of it, frankly, is just plain bizarre.

I rather expect Kennedy approaches his music here in the same way he approaches his status as a classical superstar, with the idea that image is everything. He appears to glory in his own reflection of the common, if nonconformist, man, complete with the once-curious haircut, facial stubble, working-class clothing, and London East-End dialect; and it is this brazen, nonconformist attitude that he brings to The Four Seasons. The thing is, the music, so quaint and expressive in its own right, doesn’t need further doctoring up. Well, maybe it did wonders for Kennedy’s disc sales, I don’t know. 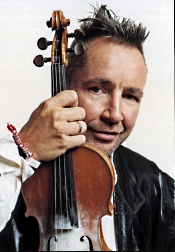 More impressive to my mind are the fillers, Vivaldi’s Concertos for Two Violins in A minor and in D. Perhaps because people know them less well, whatever Kennedy does with them is less noticeable. They are quite vivacious in his hands, splendidly alive, although again somewhat quirky in matters of tempo and tone. As an extra incentive, at the time I first reviewed this recording, EMI offered the music in a two-disc set, the second disc being a seventeen-minute promo on DVD. Here the narrator again tells us how much Kennedy has done to revitalize the Vivaldi movement worldwide, and Mr. Kennedy himself expounds upon Vivaldi’s music and plays excerpts from the CD.

EMI’s sound does not strike me as among their best, it being a bit on the bright, hard, almost edgy side, with little compensating bass response to balance out the affair. There is not much depth to the sonic image, either, and, indeed, it’s hard to tell exactly how many Berlin Philharmonic players are attending the soloist. The result is not so much realistic or natural as it is theatrical.