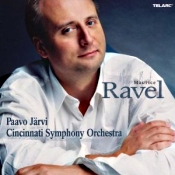 The music of Maurice Ravel is among the most poetic, imaginative, impressionistic ever written. It has the capacity to touch one’s soul as well as stir one’s blood. Unfortunately, while I found Telarc’s sound among the best afforded this composer, Maestro Jarvi’s interpretations left me largely unmoved.


Things begin with the Daphnis et Chloe Suite No. 2, which gets off to so quiet a start I wondered if my equipment was faulty. Then I realized that the output level of the disc was lower than usual, and I turned up the sound. Yet despite Jarvi’s delicate touch and lyrical vision of the work, plus Telarc’s patented big bass drum and deep low-end, none of the reading struck me as unusually inspired so much as unusually slow. The Pavane pour une infante defunte, on the other hand, appeared to move along at too brisk and lighthearted a pace to convey as much of the piece’s solemnity as I thought it deserved. I hear little of the radiance or sensuality in it that I hear under some other conductors. Nevertheless, I can easily understand how other listeners might find both the Pavane and the Daphnis performances sensitive and moving. La Valse fared better for me, though, nicely capturing the baleful irony of Ravel’s anti-waltz. I liked it a lot, and if it weren’t for the price of the disc, I could recommend a purchase for just this piece. 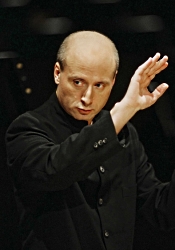 However, I found little joy in the Mother Goose songs that followed La Valse, finding them ofttimes more mundane than colorful; perhaps, however, this may have been a result of my own overexposure to the tales rather than any obvious deficiencies on Jarvi’s part. Then, the album concludes with the celebrated Bolero, likely Ravel’s most famous work. Yet, here, too, I found things slightly lacking.  Bolero should start slowly and repeat itself as it builds in intensity. What I found was that since Jarvi takes it at a healthy clip to begin with, the only thing it does is get louder. Ravel recommended about seventeen minutes for the piece. The four or five comparison discs I had on hand from Dutoit, Cluytens, Simon, and others, took from fifteen to seventeen minutes each. Jarvi covers the ground in a little over thirteen minutes, with a steadiness of rhythm that does no favors to the music.


Although Jarvi’s interpretations are earnest and occasionally elevated, with so much competition on the shelf for my Ravel listening, I doubt that I shall be coming back too often to the Cincinnati conductor in this material.


The major compensating feature of the collection is Telarc’s sound, which is luxurious in the extreme. The sonics are velvety smooth, well spread out, and nicely imaged, with a bass response to shake the rafters. The Telarc engineers again produce a recording worth listening to for the sake of its audio alone.