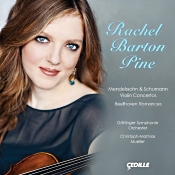 Have you ever wondered which pieces of today’s music people might still be listening to in a hundred, two hundred, three hundred years? Probably not much of modern pop music; I doubt that Justin Bieber, hip-hop, rap, heavy metal, and the like will survive. Maybe a few folk tunes already a century old. But classical music is another story. Much of Beethoven will endure, Mozart, Bach, and, of course, there will always be 800 new versions of Vivaldi’s Four Seasons available, no doubt played on instruments unknown to us at the present. Which brings us to the question of Mendelssohn. Possibly a few of his chamber pieces will continue; most likely the Third and Fourth Symphonies; certainly A Midsummer Night’s Dream. And probably the Violin Concerto, here rendered quite elegantly by violinist Rachel Barton Pine, conductor Christoph-Mathias Mueller, and the Gottinger Symphony Orchestra of Germany.

Felix Mendelssohn (1809-1847) premiered the Violin Concerto in E minor, Op. 64 in 1845, making it his last big-scale orchestral work. Audiences pretty much loved it from the start, and it has remained among the most-popular staples of the violin repertoire ever since, right up there with the violin concertos of Vivaldi, Bach, Beethoven, Mozart, Brahms, and Tchaikovsky. In Mendelssohn’s concerto the violin enters immediately, without introduction or fanfare, and Ms. Pine's interpretation of the piece is sweetly gentle. She does not race through the music to prove her energy and enthusiasm to the listener. Instead, she appears to view the work as an extension of the Midsummer Night's Dream music, the entire concerto sprinkled with fairy dust. She dances lightly through the notes, virtuosic, to be sure, yet with a tender, sympathetic step. When the music calls for big outbursts, certainly she's ready as the occasion demands. However, this is essentially a sensitive, contemplative account of the score.

The second-movement Andante is likewise sweet and gentle, with a touch of wistfulness, maybe nostalgia, thrown in. Ms. Pine never makes it sound sentimental, though, so we can't get too weepy-eyed over it. Rather, she keeps it grounded, simple, direct, and beautifully effective. Then, in the finale, she goes out with an appropriately cheerful, sprightly bounce, wonderfully happy and entertaining. This is Mendelssohn's music as we've always thought about it, frothy and enchanting. 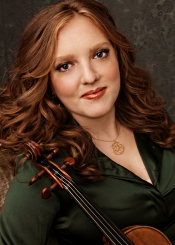 The second longer item on the disc is the Violin Concerto in D minor, WoO 23 by Robert Schumann (1810-1856). It’s hardly a major repertoire item, being among Schumann’s final works and one that never saw a performance until some eighty years after the composer’s death. Ms. Pine admits in a booklet note that she had never played the music before Maestro Mueller persuaded her to learn and record it here.

While the Schumann is a fairly long and fairly dreary piece, Ms. Pine gives it her best shot. The soloist and conductor make some minor adjustments to the score, which they believe Schumann and the composition's dedicatee, violinist Joseph Joachim, would have approved. And there is no denying that Ms. Pine puts in a heartfelt performance. It's just that it's still a dour piece of music, perhaps reflecting the composer's deteriorating state of mind at the time of its composition. Yet there are sections of soaring lyricism that transcend the work's otherwise relentlessly stern countenance. Moreover, Cedille's lovely recording quality further makes Ms. Pine's interpretation a pleasurable experience.

Filling out the program are Beethoven's two little Romances for Violin and Orchestra, No. 1 in G major and No. 2 in F major, both published between 1803 and 1805 and coming slightly before the composer’s more-famous Violin Concerto in D major from 1806. Beethoven scored both Romances relatively lightly, and in Ms. Pine's hands they come off well, being typically melodic, occasionally pensive, and always flattering.

Producer Steven Epstein and engineer Bill Maylone recorded the music for Cedille in 24-bit digital at Stadthalle Gottingen, Germany in August 2012. Like most Cedille recordings, this one is quite good.  The sound is big, warm, spacious, and realistic. Orchestral depth is good, too, dynamics are reasonably wide, and definition, while not of the kind that might impress some audiophiles with its transparency, is lifelike, with a soft, ambient glow around the instruments. Ms. Pine's violin appears nicely centered in front of the orchestra but not so far forward as to be unnatural.

Finally, with a generous seventy-one minutes of playing time, the disc provides not only good interpretations and good sound but plenty of both. For me, it was worth a listen and will continue to be worth a listen for a long time to come.