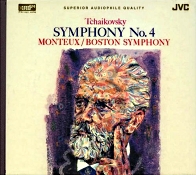 I confess I had never heard conductor Pierre Monteux’s Tchaikovsky Fourth before I got this disc a few years ago, nor did I even know he had recorded it. To my knowledge it has never appeared in RCA’s “Living Stereo” series, only in an early regular edition. I suspect, however, that Monteux recorded it at the same time he did the Tchaikovsky Fifth and Sixth, recordings I have at least heard of although, again, never listened to. The upshot is that I had no regular Monteux recording with which to compare this JVC premium remastering. Let me just say it’s pretty good.

Tchaikovsky’s Fourth is one of those warhorses that has never struck me as being all that worthy of its fame. The first two movements, frankly, have always left me unimpressed. The Scherzo, nevertheless, is quite lively and charming, and the Finale is everything one buys a high-priced stereo system to reproduce. This final movement is grand and exciting, full of bombast and brilliance in equal measure. And Monteux, whom I generally think of as a most-refined conductor specializing in the French impressionist repertoire, comes through splendidly, maybe not making the first two movements any more tolerable for me than anyone else but driving through the Finale with rousing vigor and spirit. Interestingly, my heretofore favorite recording of the Fourth has been Haitink’s 1970’s reading with the Concertgebouw on Philips, and Monteux’s timings are almost exactly the same as Haitink’s. With the exception of the sound quality, the two interpretations could be brothers, or close cousins at the least. 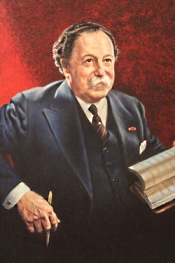 The sonic quality of this JVC XRCD is about what one would expect from a painstaking transfer of an RCA recording from the late Fifties (this one recorded in 1959). The RCA engineers were doing some of their best work with the Chicago Symphony at the time, and by comparison the Boston acoustics often produced a brighter, thinner sound than their Chicago counterparts. There is no exception here, the Boston recording being a bit top-heavy; and while producing a wonderfully extended high-end for triangles and symbols, it tends to render violins a mite hard and forward. Bass could also have been deeper. That said, the audio quality is nevertheless quite good: clean, relatively quiet if played at reasonable levels, dynamic, transparent, dimensional, and alive. Several of the loudest passages seemed to me to distort slightly, but it may have been my imagination.

Although I still prefer the more natural and resonant Concertgebouw acoustics, I cannot deny the sheer spectacle of the Boston recording in this JVC remastering. Whether it’s worth its high asking price, that’s for you to decide. I can tell you, though, that if Monteux interests you in this particular material, you can still find it from RCA at a modest price in a regular edition (which also includes Symphonies 5 and 6). However, if you want No. 4 alone and remastered to audiophile standards, this JVC product looks like the only way to go. Just don’t complain afterwards about the cost; you probably wouldn’t want it any other way.