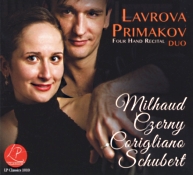 Natalia Lavrova and Vassily Primakov are award-winning Russian concert pianists whose friendship and musical collaboration has led them to form their own record company, LP Classics, of which the present recording is their second release. Presumably “LP” stands for Lavrova-Primakov, but back in the old days it stood for “long-playing.” Maybe we can think of it as meaning “lovely performance,” certainly a good description of their collaborative effort on this four-hand piano recital.

The first item on the extremely varied program is Le Boeuf Sur Le Toit (“The Ox on the Roof: The Nothing-Doing Bar”), Op. 58 by French composer Darius Milhaud (1892-1970). It’s a delightfully bizarre, satiric work that Milhaud based on a number of Brazilian choro, generally quick, festive tunes full of counterpoint rhythms. Le Boeuf runs merrily along with a series of wholly charming melodies, almost all of them with up-tempo beats that have one tapping along. More important, the pianists seem totally in accord with one another, despite switching parts several times. Their playing is quite spectacular at times.

Next up is the Grand Sonata for Piano Four Hands in F Minor, Op. 178 by Czech-born Austrian composer, teacher, and pianist Carl Czerny (1791-1857), a fellow noted for his piano exercises. Czerny actually wrote piano pieces for four, six, and eight hands, so this one is among his less-ambitious works. I tease. The track makes a good change of pace, much more serious in a dignified, old-fashioned manner. Yet given the virtuosic playing of Ms. Lavrova and Mr. Primakov, it sounds spirited and joyous, Lavrova in the primary piano part, Primakov the secondary. Czerny structured the piece in four movements, the first quite energetic; the second, slow section most delicate and ethereal; the Scherzo merry yet sensitive; and the Finale slightly nervous, troubled, increasing in intensity, and ending on a strongly optimistic note. The pianists have a good time with it, showing off their pianistic skills in an imposing display of musical gymnastics.

After that is Gazebo Dances for Piano Four Hands by American composer and teacher John Corigliano (b. 1938). Corigliano's four dances go from an overture to a waltz to an adagio to a tarantella and offer the pianists another fine vehicle for their impeccable showmanship. Of course, all four dances come with Corigliano's surprises, so don't expect anything run-of-the-mill here, either in the music or the playing. 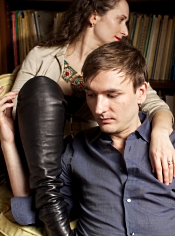 The album concludes with the Fantasie in F Minor for Piano Four Hands, D.940 by Austrian composer Franz Schubert (1797-1828). Written in 1828 and among the composer’s final works, the Fantasie is probably the most-important piece on the program. With Schubert we enter an entirely different musical world altogether, one filled with elegance and grace, which is exactly what Lavrova and Primakov provide, this time with Mr. Primakov taking the primary part. There is a thoughtful perception and insightful response to the playing that makes their interaction sublime.

With performing standards of the highest order and music of color and variety, the album should provide a refreshing listening experience for almost anyone, no matter one's tastes.

Producer, recordist, editor, and mastering engineer Charlie Post made the album in August 2012 at the Adelphi University Performing Arts Center’s Concert Hall, Garden City, New York. Here, we find a comfortable, spacious, room-filling piano sound, a little wider than a piano might really sound live but certainly ringing forth with a beautiful tone and clarity. It's all rich and warm and dynamic, just as we'd want a piano to sound, with a pleasantly sonorous ambient glow.