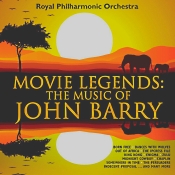 British conductor and film composer John Barry (1933-2011) began his musical career in the late Fifties and continued to write hit movie music for the next fifty-odd years, winning numerous awards and nominations in the process. The present disc is a tribute to the man, featuring longtime Barry arranger Nic Raine and others leading the Royal Philharmonic Orchestra in some of Barry’s most-familiar work.


But here’s the thing: Barry’s most-celebrated music is all the stuff he wrote for the James Bond series, starting with an arrangement of Monty Norman’s theme for Dr. No and continuing with Bond scores for the succeeding twenty-five years. Yet there is no Bond music whatsoever on this tribute album. None. Zero. Zilch. There are eighteen tracks from eighteen separate films, but not a single Bond in sight. I tried to find an answer to this enigma in the accompanying booklet, but no dice. There is only a little information on the RPO but nothing about the music or its selection. I can only guess, therefore, that maybe producer and conductor Nic Raine decided not to include any Bond because it would be too obvious, that most Barry fans already had plenty of the man’s Bond music on disc. But, really? Not even a single track? Someone new to John Barry’s music would assume from this disc that he had nothing to do with the Bond films.


Anyway, first up on the program is Born Free, a score for which Barry won two Academy Awards. I’ve always found the music a little syrupy, but it’s all a matter of taste. The public bought a ton of it, and it’s become one of Barry’s signature tunes. Nevertheless, despite its sometimes sentimental overtones the music comes up well under Maestro Raine, who gives it a vigorous workout. I hadn't heard the music in quite some time, either, and I couldn't help hearing hints of Maurice Jarre’s Lawrence of Arabia in it. 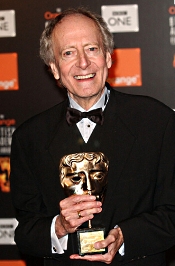 And so it goes throughout the selections. A few favorites include The Ipcress File for its low-key jazzy arrangement; Dances with Wolves for its singing melody; King Rat for its military cadences; Zulu for its dramatic engagement; Midnight Cowboy for its bluesy melancholy; The Quiller Memorandum for its lilting rhythms; and Out of Africa for its epic scope.


The rest of the music is fine, too, although it is largely lightweight. For the John Barry fan who already owns a few discs of the composer's Bond tracks, the present selection takes us through a good representative selection of Barry's output, about sixty-eight minutes' worth. Moreover, I can’t imagine a conductor handling the music any better than Raine does, his having known and worked with Barry for as long as he did.


Nic Raine produced and Gary Thomas engineered the recordings at Angel Studios, London, in December 2012. The sound is big and bold, much as we would expect of film music. It's also somewhat "pop" sounding, meaning it's close; well, almost clinically defined; and it’s fairly dynamic (or at least loud). However, you won't get much sense of the live occasion here, much orchestral depth, hall ambience, or air. This will be of little concern to the fan of film music, though, and the recording does provide a robust listening experience.

Email ThisBlogThis!Share to TwitterShare to FacebookShare to Pinterest
Labels: Barry