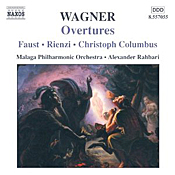 Over the years the folks at Naxos have provided the classical-music public some solid, well performed, reasonably well recorded, and fairly priced discs. The present album, however, isn’t necessarily one of them unless you are specifically looking for something out of the way.


The strongest virtue of this collection of early Wagner overtures is that it offers up some little-known, little-heard music by the composer. Beyond that, I’m afraid it can get a little dicey. Pleasant, but dicey.


The most popular item on the album is the opening work, Richard Wagner’s “Rienzi” overture, the composer’s first big hit as it were, which he premiered in 1842. Maestro Alexander Rahbari and the Malaga Philharmonic give it an appropriately swaggering performance, emphasizing all the pomp and ceremony that Wagner could muster. There is definitely a reason why Rahbari starts the program with this number.


The other four works, though, are not so well known, and for a reason; they aren’t as interesting as the opening piece and certainly not as important as Wagner’s much-later material. Written mostly in the 1830’s, before people even knew who Wagner was, the disc’s early Wagner works show a marked inclination toward melodrama, borrowings from other composers; and, while pleasing enough, they lack the kind of invention we would later expect from Wagner. Nevertheless, they make intriguing mementos of the composer’s past and should be of value to anyone interested in the composer’s early efforts. 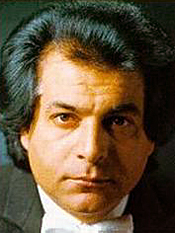 After “Rienzi” comes “King Enzio,” which Wagner wrote in 1832 as an overture to a play by Ernest Raupach. Beethoven’s Fidelio appears to have influenced the composer, yet Wagner’s piece seems a pale imitation by comparison. Still, Maestro Rahbari does it justice, I’m sure, in a first-time recording, and makes it seem a moderately engaging piece. “The Ban on Love,” 1836, sounded a bit too insipid for my taste, however, with the exception of some tambourines and castanets in the opening, which are admittedly kind of fun. “The Fairies” overture, 1834, has the promise of Weber but soon leaves that prospect behind and becomes slightly wearisome. “Christoph Columbus,” 1840, another rarity, fares better than most of the other early overtures and gives us some idea of Wagner’s future creativity.


The disc ends with “Faust,” an overture that Wagner began as the first movement of a proposed Faust symphony begun years earlier but revamped in 1855. It’s no “Rienzi,” but it does foreshadow the bigger, better things to come. Franz Liszt liked Wagner’s Faust overture so well he wrote his own, more famous Faust Symphony, encouraging Wagner to do some revising of his own. Anyway, the result in Wagner’s overture is more than listenable and quite engaging by itself.


Although Maestro Rahbari gives each reading a competent, if sometimes seemingly perfunctory, reading, the Naxos engineers do him no favors with their close yet reverberant and somewhat veiled sonics. The Malaga Philharmonic appears to be producing a smaller sound than that which eventually reaches our ears, but thanks to a magnification of the mid and upper bass, the whole thing appears bigger than it should be and a bit muffled. While the result is not exactly akin to throwing a blanket over the speakers, if you happen to have something on hand such as Klemperer’s superb old EMI set of Wagner orchestral music, you’ll immediately hear a greater transparency from the EMI recordings despite their age.