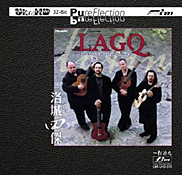 The Los Angeles Guitar Quartet (LAGQ) is probably the best guitar ensemble since the Romeros. Which isn’t hard to understand when you consider that in 1980 Pepe Romero oversaw their formation. Since then, the LAGQ have recorded a slew of albums, winning a Grammy in 2005 for Best Crossover CD, Guitar Heroes. They recorded the present album in 2001 for Telarc, and FIM remastered it to the best possible audiophile standards in 2012. If you like guitar music, you’ll like the LAGQ.


Although Matthew Greif replaced Andrew York in 2005, the group has remained pretty much the same for over thirty years, this Telarc/FIM disc featuring original quartet members John Dearman, William Kanengiser, Scott Tennant and Andrew York. The fellows generally play on guitars using nylon strings in order to reflect the sounds of numerous other instruments and effects. Indeed, on some occasions they appear to be imitating the sounds of an entire symphony orchestra.


On LAGQ: Latin the quartet performs seventeen tracks, starting with Sting’s Latin-inflected tune Fragile in an arrangement that includes Tim Timmerman on percussion. The LAGQ’s rendition is gracefully touching. Next is Eduardo Martin’s Hasta Alicia Baila (“Until Alicia Dances”), a sort of Cuban rumba with an infectious beat.


Then we get the centerpiece of the album, a suite of numbers from Bizet’s Carmen. It’s delightful and should please guitar fans as well as Bizet admirers. The opening Aragonaise shows true panache, the Habanera has a lovely lilt, Seguidilla displays a sweet gentleness, the Toreadors provides a thrilling energy, the Entr’acte is simply gorgeous, and the Gypsy Dance closes the suite in a colorfully spirited fashion. 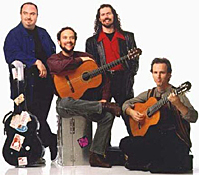 Following the Carmen Suite, we find a whole series of Cuban, Spanish, Central, and South American numbers. One fascinating item is Leo Brouwer’s Cuban Landscape with Rain, containing--you guessed it--the sounds of rain from the guitars. There is also a delicious performance of Aaron Copland’s Paisaje Mexicano (“Mexican Landscape”) that is quite lyrical. And so it goes, each tune a little gem, each one beautifully, expertly executed by the LAGQ.


The program ends with a reimagining of the second movement from Joaquin Rodrigo’s Concierto de Aranjuez that floats softly, poetically, as on a light breeze.

The sound is, not surprisingly, sublime, one of the better guitar recordings I’ve heard. Not only is it ultra clear and ultraclean, it’s ultrasmooth as well. Each plucked or stroked note stands out transparently, with its own richness and warmth. As important, the dead-quiet spaces between the notes sets off each sound in sometimes startling contrast.


To listen to a brief excerpt from this album, click here:
JJP
Posted by John J. Puccio