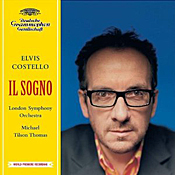 The name “Elvis Costello” (born Declan Patrick MacManus) probably isn’t the first one that leaps into most people’s minds when they think of big-scale, classical orchestral works, but I suppose if Paul McCartney could do it, so could Costello. The Italian dance company Aterballetto asked the rocker in 2000 if he would compose an original ballet score for their production of Shakespeare’s A Midsummer Night’s Dream, and Costello went for it, producing Il Sogno (“The Dream”). What we have on this recording is a revised concert version of the score conducted by Michael Tilson Thomas and the London Symphony Orchestra.

Since Costello wrote the score for a ballet, the music is necessarily episodic, although with the help of Tilson Thomas, the composer was able to connect the various disparate elements together into something acceptably seamless. There is but one slightly jarring element, however. The first fifteen minutes or so are quite Romantic in mood and construction, harking back to pre-Stravinskian days. Then, out of the blue, the music takes on strong jazz inflections reminiscent of Gershwin. The jump is somewhat disconcerting. 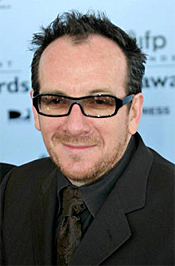 Some listeners may think the whole enterprise adventurous; others will see it as awkward. Anyway, once we get past the transition, the music alternates between the late nineteenth and early twentieth centuries in technique, with many of the melodies seeming to belong to a modern motion-picture soundtrack. Unless you’re a devoted Costello fan and have heard some of his non-rock compositions, the result is probably like nothing you might have expected from the man: laid-back, jazzy, and, as I say, Romantic. It passes a pleasant enough hour, especially under Tilson Thomas’s affectionate direction and with the LSO’s impeccable playing.

The sound the DG engineers derive from sessions with the LSO at Abbey Road Studios is agreeable as well. It will not win many audiophile awards because it lacks a real punch most of the time, yet it’s pleasingly smooth, with a wide stereo spread and a reasonably good amount of orchestral depth. Nothing to complain about.

Email ThisBlogThis!Share to TwitterShare to FacebookShare to Pinterest
Labels: Costello