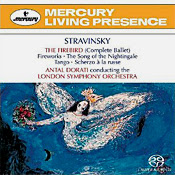 Maestro Antal Dorati’s recording of the complete Firebird ballet on this hybrid SACD from Mercury is self recommending. Recorded in 1959, it has been among my two or three top choices in this repertoire for nearly half a century. Presented on this disc in a new three-channel mix and in the two-channel stereo CD transfer supervised by its original recording director, Wilma Cozart Fine, in the early Nineties, the sound is exceptionally lucid, dynamic, and well spread out. Indeed, it is one of the best-sounding discs of any kind you’ll find, a real sonic treasure. There is some very slight background noise during the quieter moments, but it is hardly an intrusion and not at all objectionable. The performance itself impresses one as ideally balanced, with the colorful music fully realized, the drama intact, and the lyrical beauty clearly presented.

Accompanying the Firebird are three short works, Fireworks, Tango, and Scherzo a la russe, all nicely recorded in 1964. But the big surprise for anyone who hasn’t heard it is The Song of the Nightingale. It is nothing short of astonishing. For me, there has only been one other performance the Nightingale worthy of mention alongside Dorati’s, and that is Reiner’s earlier account on RCA Living Stereo. Yet Dorati’s recording actually has the clearer, more overtly spectacular sound. 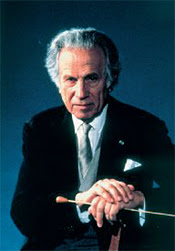 If you’re not familiar with the piece, The Song of the Nightingale was an opera Stravinsky helped score, from which the composer excerpted the symphonic suite we have here. He always liked the suite best, saying “a perfect rendering could only be achieved in the concert hall.” The work recounts the story of a nightingale in the court of a Chinese emperor, a bird whose favor gets displaced by a mechanical bird.  When the machine breaks down and the emperor becomes so dejected he almost dies, the real bird must return and right the situation. It’s a fairy tale, and Stravinsky’s fairy-tale music fits it perfectly. More important, Dorati’s light, airy, fairy-tale direction perfectly underpins every facet of the performance.

For those folks who own SACD players and ancillary equipment, the recording us, as I said before, available in three-channel stereo, just as Mercury originally recorded them. Otherwise, you listen as I did, to the regular two-channel layer. Remastered in DSD (Direct Stream Digital), the results are not just satisfying, they’re outstanding.