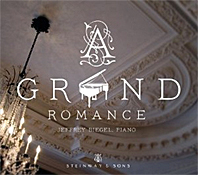 According to my count, A Grand Romance would be the third album that composer, arranger, pianist, and Steinway recording artist Jeffrey Biegel has made for Steinway & Sons, following Bach on a Steinway (2010) and A Steinway Christmas Album (2011). On this current disc, we find a collection of short, Romantic piano pieces, described on the record jacket as celebrating “the intimacy of the relationship between pianist and public. Penned by composers who were highly accomplished keyboardists themselves, it represents a genre of pianism unashamed of sentiment, frill and facility, and luxuriating in the expressive sophistication of the instrument and the wooing of the crowd.” Well, woo it does, as Mr. Biegel’s piano practically makes one swoon in delight. It’s a charming bit of piano playing.

Also important, perhaps, is the fact that Mr. Biegel has chosen sixteen pieces of music from the Romantic repertoire that pianists these days haven’t overplayed or over recorded. In general, I don’t usually care for albums made up of bits and pieces of stuff, but when so much of the material here is both so pleasurable and relatively unknown, and, of course, so well performed, it makes for a good listen, one I hope to repeat often.

Things begin with the Caprice espagnol by Moritz Moszkowski (185401925). It’s a work that begins the show as a zesty curtain-raiser and then settles down into a sweet dance tune. The music offers a good example of Biegel’s versatility in handling passages of virtuosic intensity and restrained lyricism.

Following the Caprice is a delicate waltz (you can hear a bit of it below) called A la bien-aimee (“To My Beloved”) by Eduard Schutt (1858-1934). It’s lovely.  Shortly thereafter, we find the Nocturne in B-flat major by Ignacy Jan Paderewski ((1860-1941). This Nocturne is particularly affecting, with a gently nuanced performance by Mr. Biegel. 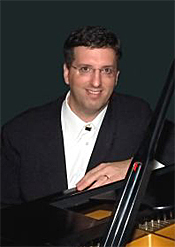 And so it goes, Biegel alternating slower and quicker numbers as the program proceeds. Further works by Henselt, Cui, Bortkiewicz, Schlozer, Levitzki, Sgambati, and Chasins continue in a similar vein. An especially enchanting one is the tone poem Reve angelique (“Angelic Dream”) by Anton Rubinstein (1829-1894). Another one is Arabesques on “The Blue Danube” by Adolf Andrei Schulz-Evler. It’s a melodious little piece (and it’s the longest work on the album at a little over ten minutes), and as always Mr. Biegel manages it with a deft hand (and with what appear to be about 800 deft fingers).

This is high Romanticism at its more winning and most engaging. To complement the music, Jeffrey Biegel’s pianism is both comfortable and dazzling.

Producer Dan Merceruio and engineer Daniel Shores recorded A Grand Romance in July, 2012, at Sono Luminus studios, Boyce, Virginia. The piano appears miked relatively closely and produces a big, rich, robust effect. It does not, however, spread clear across the room but stays a realistic size, well centered and occupying maybe half the space between one’s speakers. You’ll also note a pleasantly warm ambience that adds to the verisimilitude of the occasion.