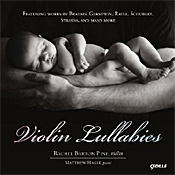 Who doesn’t like a lullaby? Everybody likes a lullaby. For many of us, it was the first music we ever heard. Lullabies are so popular that almost every classical composer of the last few hundred (nay, perhaps few thousand) years wrote some of them. Violinist Rachel Barton Pine and piano accompanist Matthew Hagle have chosen over two dozen examples of the genre for performance on the present disc. The playing is beautiful and the music relaxing, all of it inspirational in its way.


Ms. Pine explains in a booklet note that while the repertoire for the album had been in the back of her mind for quite some time, the birth of her first child actually inspired the program, which she plays on a 1742 “ex-Soldat” Guarneri del Gesu, Cremona.

While I admit that I’m not overly fond of albums containing bits and pieces of things, I can easily make an exception with this one. I also admit that the older I get (which is beginning to verge on ancient), the more sentimental I become. Thus, the Brahms Wiegenlied (“Cradle Song”), possibly the most-famous lullaby ever written, that opens the program practically brought tears to my eyes. It’s positively lovely, with committed, heartfelt playing from Ms. Pine, whose own child must certainly be lucky to have so talented a mother to play these things for her now and throughout her life. Ms. Pine says that some of these lullabies are part of a bedtime routine for her child, which she sings to the baby every day, often joined by her husband an octave lower. The cover and inlay photos, incidentally, are those of Sylvia Pine, age two weeks.

Bits and pieces notwithstanding, I think I could listen to this stuff all day. Also called berceuse in French and wiegenlied in German, there is more variety in the lullaby or cradlesong than you might suppose. Ms. Pine’s collection illustrates the point with as many variations of the theme as possible in a seventy-nine minute album. She describes them as “short and elegant” pieces, and surely they are, most them composed for violin and piano.

Of course, I have my favorites on the disc. The aforementioned Brahms, for sure; an even more wistful one by Amy Beach; a Scottish-inflected one by Ludwig Schwab; a rendition of Gershwin’s “Summertime” that never sounded more soulful; a particularly endearing piece by Faure; a more austere one by Sibelius; a jaunty number from Pauline Viardot-Garcia; and a mystically Romantic one by twentieth-century composer Alan Hovhaness that fits right at home with the composers of the nineteenth century. 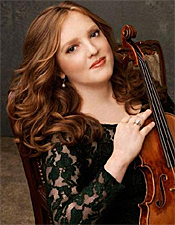 Then, too, you’ll not mistake Stravinsky’s lullaby from the Firebird for anything but Stravinsky. And there is Schubert, as you would expect producing one of the most melodious lullabies of all, as is the Schumann that follows it. Over a dozen more complement these selections, each of them a perfect little gem from the likes of Respighi, Falla, Grieg, Reger, Richard Strauss, and more.

Obviously, the violinist in such material must be completely in tune with the mood of these pieces and must display an emotional sensitivity to go with it. Ms. Pine has the credentials, the virtuosity, and the temperament to offer up this music as a part of herself. One couldn’t ask for greater versatility in a performer.

Cedille founder, producer, and president James Ginsburg and ace engineer Bill Maylone made the album in 2012 at the Fay and Daniel Levin Performance Studio, 98.7 WFMT, Chicago, Illinois. What they got for their trouble is one of the most realistic violin sounds I’ve found. You can hear every nuance of the bowing, every rasp, every stroke, every quiver, every detail. The piano is fine, too, although it is well in the background providing a soft accompaniment.