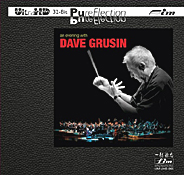 An Evening with Dave Grusin is not so much a live concert or even a musical event as it is a celebration. It celebrates over half a century of music from composer, arranger, and pianist Dave Grusin, whose work includes everything from the scores to The Graduate, The Midnight Man, and Three Days of the Condor to classical and jazz compositions, earning him Academy Award nominations, Golden Globe nominations, Grammy nominations, and several Grammy award wins. On this 2009 live performance album remastered by FIM/LIM, Grusin acts as conductor of the Henry Mancini Institute Orchestra and as host, with the guest stars listed above joining in. He makes his own best fitting tribute to himself in the music he plays and leads.


Among the tunes that most appealed to me were the opening item (heard in part below), Grusin’s own “Fratelli Chase,” a lively pop-jazz piece with a good deal of sparkle. Then there’s a lovely combo of Grusin’s music to On Golden Pond and a spirited hornpipe medley. A few tracks later we find an effectively sultry Porgy & Bess medley.


For more jazz than not, pioneering vibraphonist Gary Burton joins in as soloist on Bernstein/Sondheim’s “Cool” from West Side Story. Following that is more from the musical as Jon Secada and Patti Austin do a duet of “Somewhere,” Secada does “Maria,” and flutist Nestor Torres solos in “I Feel Pretty.”


Right in the middle of the concert, almost out of left field, comes a suite from Grusin’s movie score for The Milagro Beanfield War. It’s the best, and longest, piece on the program, full of musical invention, lustrous melodies, and delightful playing. It’s a light, lilting, lyrical work most of the way that, frankly, took me by surprise as I hadn’t remembered how good the movie’s music was, it had been so long since I’d seen the film.


The album ends with Henry Mancini’s familiar theme to TV’s Peter Gunn, with Gary Burton soloing, and then Grusin’s “Memphis Stomp,” which brings things to a roaring close. With great sound, great music, and great performers, it doesn’t matter that most of it comprises short bits and pieces or that the whole thing is so short; it’s what we expect of a pop-concert album, and Grusin provides it in spades. 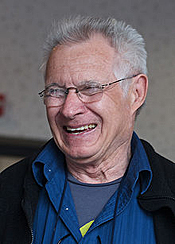 
The sound exhibits a terrific dynamic range and impact, with very deep bass and a quick, clear, clean transient response. The extended treble works well with the high end, showing off the cymbals and such. Instruments appear realistically spread across the soundstage, although orchestral depth is modest. The separation of instruments makes up for any lack of depth, however, and there is plenty of air and space around them. Vocals seem fairly well integrated with the orchestra, maybe a little close but natural to a pop concert. They also sound smooth and lifelike. Because it’s live, expect a touch of audience noise during performances and, of course, the inevitable eruptions of applause after every number.