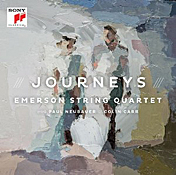 The Emerson String Quartet is not the oldest string quartet in existence, but surely it is among the most well known. Formed in 1976 and with only a couple of personnel changes, the group has released over thirty recordings and won three Gramophone Awards and nine Grammys for Best Chamber Music Performance and Best Classical Album. Did I also mention they are among the best at whatever music they attempt?


The first of the selections on the program is the Souvenir de Florence, Op. 70 by Peter Tchaikovsky (1840-1893), which he wrote for string sextet in 1890 and premiered in 1892. He called it a “souvenir of Florence” because he composed a part of the second movement while visiting the city. As with Schoenberg’s Verklarte Night that follows on the disc, we often hear Tchaikovsky’s piece adapted for chamber orchestra, but there’s something a little more intimate about these original sextet arrangements.


The first movement is somewhat stormy, tumultuous in fact. The Emersons attack the opening not just with verve but with absolute rigor. The movement quickly settles down into a rapturous melody that the Emersons infuse with an even further enlightening energy. It’s still quite lyrical but on a spirited scale, especially in that drawn-out second subject with its delicious counterpoint.


The slow second movement, the Adagio cantabile e con moto, is serene, the Romantic centerpiece of the work. The Emersons capture its delicately rhapsodic nature without giving in to the temptations of sentimentalizing it. They bring out all its most lovely contrasts, the strings almost literally singing their parts. It is sublime. 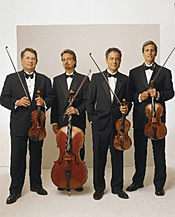 The final two movements, marked Allegretto moderato and Allegro con brio e vivace, increase in tempo and gusto, sounding far more rhythmically vital and “Russian” than the rest of the work. In the Emersons’ hands, these sections bounce along at a zippy yet never breathless pace, the third movement sounding particularly folksy in its presentation. The finale begins with a quick dance tune that the Emersons handle in vivacious style, producing a sunny, warm-hearted result.


The final number on the disc is Verklarte Nacht (“Transfigured Night”), Op. 4, a single-movement sextet written by the Austrian composer and painter Arnold Schoenberg (1874-1951) in 1899, one of his first important works. Apparently, his inspirations were a poem by Richard Dehmel and his feelings for a young woman, Mathilde von Zemlinsky, whom he would eventually marry. Audiences at first did not appreciate the piece, finding it too eccentric, too avant-garde for them. Today, we recognize Schoenberg’s occasional dissonances as a part of the work’s beauty. Besides, it was only the start of Schoenberg’s modernism.


Anyway, the Emerson players perform Verklarte Nacht with great urgency and drama, charging it with notable expression through their nuance and coloring. One has little trouble following the music’s interrelated themes (especially with the words to Dehmel’s poem reproduced in the accompanying booklet) as its story unfolds in a miniature tone poem. The Emersons emphasize the warmth, stillness, passion, and pathos of the poem, their playing again immaculate.


Sony recorded the Quartet at LeFrak Concert Hall, Queens College, New York, in 2012. The miking puts the players fairly close, creating a wide left-to-right stereo spread; meaning you’re not far away from them. There is nothing hard, bright, or edgy about the recording, though. The sound is smooth and natural, with a pleasantly warm ambient glow around the notes that in no way detracts from the acoustic detailing. For a small chamber work, its sound is impressively big and luxuriant.