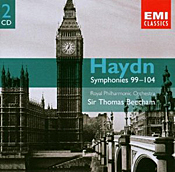 Time was, you couldn’t consider recordings of the late Haydn symphonies without mentioning Sir Thomas Beecham. The symphonies were among his treasures, and he spent a lifetime playing and perfecting them before recording them in stereo late in his career in 1959. The maestro’s experience showed, and for most of the late Fifties and Sixties, the Beecham records held sway.

By the late Sixties and mid Seventies, however, other conductors had come along to provide Beecham some competition, Otto Klemperer and Eugen Jochum in particular. Then came Colin Davis, Leonard Slatkin, Charles Mackerras, Sigiswald Kuijken, Roy Goodman, Christopher Hogwood, and others. But now that I’ve returned to these recordings, I see little reason to question their authority as some of the overall best of the lot.

Oh, there are individual favorites I still retain, like Klemperer in “The Clock” and Jochum in the “Military” Symphony, but as a set, these final six of Haydn’s twelve “London” Symphonies from Beecham are hard to beat. They got the nickname “London” Symphonies, of course, because Haydn wrote them while he was temporarily living in London. Four of the final six have descriptive nicknames that call them easily to mind: No. 100, the “Military” because of its march and the martial sound of its percussive instrumentation; No. 101, the “Clock” because of its second movement imitation of a clock’s second hand ticking; No. 103, the “Drum Roll” because of its...wait for it...drum roll; and No. 104, the “London” simply because it was the last symphony Haydn would write in London. Or anywhere, for that matter. 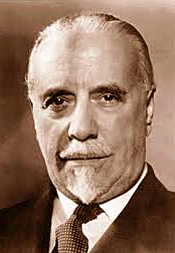 Beecham brings to the performances his usual joyous, cheerful mood plus a touch so light you can feel the music wafting out of the speakers, floating out the window, and into the breeze. Yet in the culminating “London” Symphony there is a nobility and grandeur to match Mozart’s “Jupiter.” The playing is felicitous throughout, the atmosphere always loving, always caring. Nothing about the performances seems anything but perfect. They simply remain head and shoulders above most of their rivals.

When I first heard Beecham’s Haydn symphonies on compact disc, unfortunately early in the CD era, I didn’t care much for the sound; they had not made a good transition to silver disc and sounded hard, edgy, and exceptionally noisy. It was one of my biggest disappointments not to have Beecham’s Haydn included in my then-new CD music collection. But a few years ago EMI remastered the symphonies, and in the present two-disc set they sound fine. There is still a touch of background noise if played loudly, but who plays Haydn that loudly? And the sound is still a tad thin in the bass. But a smoother net effect now graces the ear, warmer and less brittle. The midrange is perhaps not as transparent as it could be, but there is nothing, really, that should deter a listener from appreciating the performances to their fullest. A wonderful investment.