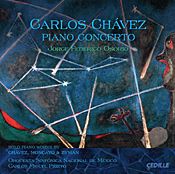 So, who is Carlos Chavez, whose Piano Concerto is the centerpiece of this Cedille disc? Regrettably, I must admit that I had never heard of him before now, which only demonstrates how little I know. Carlos Antonio de Padua Chávez y Ramírez (1899-1978) was a Mexican composer, conductor, educator, and journalist, the founder and director of the National Symphony Orchestra of Mexico, the very group who perform on this album. Chavez wrote symphonies, quartets, sonatas, incidental music, and concertos, and he was among the most influential composers of his day.

Fortunately, I can say I have heard of pianist Jorge Federico Osorio, who performs the Piano Concerto along with several solo pieces on the disc. Osorio is a piano virtuoso of international fame, and in my experience he has never demonstrated anything but sensitive, immaculate, committed, passionate  playing in his work. It was a pleasure listening to him on the Cedille disc, and even though I had never heard any of the music before, he made it appear vibrant and entertaining.

As I say, the centerpiece is Chavez’s Piano Concerto, written in 1940. Now, here’s the thing: If you’re looking for something Latin-inflected, this may not be what you want. While the booklet note says that Chavez adhered to local tradition and borrowed from indiginous native culture, I could hardly detect it. The fact is, there is more Stravinsky here than anything Hispanic or Native American; however, as Chavez’s style is to create constantly shifting dissonances, it’s hard to tell what might be buried in all the notes.

Anyway, there seemed to me to be as many Asian-oriented passages as anything else, at least in the first few minutes. Now, here’s the thing: You may find it as complex and scintillating as critics did at the premiere or as cacophonous as audiences did, which may explain why the piece has gotten so little attention since. Nevertheless, as a modernist, Chavez used cacophony as a part of his technique, so you live with it.

Although I had no other recording of the Concerto with which to compare this one, I can’t imagine another surpassing Osorio’s way with it. His playing is full of intense, nervous energy, which no doubt the Chavez work requires. There is nothing Romantic or sentimental, either, not in Chavez’s music and not in Osorio’s performance.

What we get here is an abundance of sharp contrasts and vibrant rhythms, with a good deal of percussion and flute backing up Osorio’s piano. But it’s always Osorio’s piano that is front and center in the music, with Osorio mining a seemingly inexhaustible fund of accents, textures, nuances, and brief flurries of melody.

Chavez follows the momentous first movement with a rather outgoing slow one, largely scored for piano, harp, and reeds. Again, it’s Osorio who rightly dominates, his playing always keeping the listener intently aware that this is music of an original kind, strongly characterful, but, again, never romanticized or nostalgic. Then, with the finale, we’re back to the cacophony of the first movement, where Osorio dazzles with his gymnastic finger work. It’s quite a bravura piece of music with a performance by Osorio, Maestro Miguel Prieto, and the Orquesta Sinfonica Nacional de Mexico to match. Whether you’ll like it or not is another question. 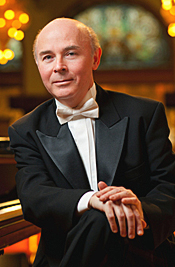 Also on the program are three solo piano pieces, the first of which is Chavez’s Meditacion, an early work from 1918. As the name implies, it’s contemplative, sounding rather Debussy-like in its quiet, dreamy way. Osorio makes sure, though, that we don’t dismiss it out of hand as lightweight, and his alternating dynamism brings out the work’s more-creative development.

Next, there is Muros Verdes (“Green Wall,” 1951) by Jose Pablo Moncayo (1912-1958), a Mexican pianist, percussionist, music teacher, composer, and conductor. As with Meditacion, Muros Verdes comes across with an easygoing stillness. Then, the album ends with Variations on an Original Theme (2007) by the contemporary Mexican composer Samuel Zyman (b. 1956). It exhibits a remarkable variety of fast, slow, agitated, relaxed, and vibrant characteristics. Needless to say, Osorio puts his heart into it, and while it can sound somewhat as cacophonous as Chavez’s Concerto, it also sounds richly expressive.

Producer and engineer Bogdan Zawistowski and engineer Humberto Teran recorded the Concerto in 2011 at Sala Nezahualcoyotl, Centro Cultural Universitario UNAM, Mexico; and producer James Ginsburg and engineer Bill Maylone recorded the additional solo pieces in 2012 at the Fay and Daniel Levin Performance Studio at 98.7 WFMT, Chicago. The miking in the Concerto ideally integrates the piano and orchestra, even if the modest distance employed can result in a slightly recessed sound if played back too softly. The midrange is smooth and natural, without losing too much detail, the hall imparting a faint, pleasant glow to the music. At an appropriate playback level the sound is nigh-well perfect, with wonderful percussion effects. In the solo pieces, we hear a slightly closer, more-dynamic piano sound, near ideal.

Email ThisBlogThis!Share to TwitterShare to FacebookShare to Pinterest
Labels: Chavez