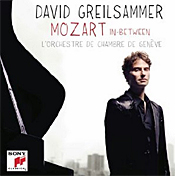 Everybody needs a gimmick, I remarked the last time I reviewed an album by David Greilsammer. That was Conversations, a disc that offered four segments comprised of three piano selections each, two Baroque masterpieces as the outer movements and a modern work in the middle. It was clever, and Greilsammer pulled it off pretty well. With this follow-up album, In-Between, Greilsammer provides several works by Mozart as a young man, a composer “in-between” his earliest youth and his adulthood, along with the premiere recording of a modern contemporary piece called In-Between by Swiss composer and musician Denis Schuler. While Greilsammer again handles the music quite well, I’m not sure he and his producer needed the “in-between” gimmick to sell it.

Anyway, David Greilsammer is a prizewinning pianist as well as the Principal Conductor of the Geneva Chamber Orchestra. Born in Jerusalem, Israel, he studied there at the Rubin Academy before entering the Juliard School in New York and making his solo debut in 2004. Apparently, one of the things audiences have enjoyed are his recitals juxtaposing Baroque and contemporary music, as he did in his earlier program. Now, he tries a similarly themed approach to Mozart.

Greilsammer says of the In-Between album, “Each of the pieces represents a different in-between situation, all guiding us towards the violent imaginary storm that occurs in Mozart’s heart. Once we have arrived inside this secret world, we suddenly find ourselves facing a battle between opposing forces: light and darkness, the human and the divine, childhood and adulthood, conservatism and innovation, solitude and the collective, love and hatred, past and present, dream and reality, father and mother.” I have only an inkling what he means, he gets so carried away with his highfalutin rhetoric. Fortunately, Greilsammer’s vague thematic connections cannot displace his excellent execution of the music, which sounds delightful.

The program leads off with Mozart’s Symphony No. 23 in D major, K. 181, written in 1773 when the composer was seventeen. Since it’s such a youthful work, that’s the way Greilsammer conducts it--youthfully, with plenty of exuberant energy. The symphony contains only three movements, in the Italian style of the day, and, coincidentally, Mozart wrote it after his third trip to Italy. It’s very brief, all three movements comprising less than ten minutes: fast-slow-fast, and more like an overture, really. Greilsammer has fun with it, even though the second movement isn’t so much fun as it is emphatically dramatic. The finale is ablaze with action, which Greilsammer appears to delight in. 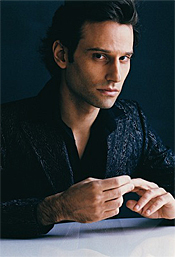 Next, we get Mozart’s Piano Concerto No. 9 in E-flat major, K. 271 “Jeunehomme,” which he wrote in 1777 at the age of twenty-one. Here, Greilsammer both conducts the orchestra and plays the piano, and it’s also here that Greilsammer proves his worth. The piece has a delightful charm about it, and even if Greilsammer does go at it at a lickety-split pace, he never loses track of either the pulse of the music or the pleasures of the piano’s interactions with the orchestra. Meanwhile, the orchestra provides a flawless dialogue with the piano.

Then, after a typically rambunctious first movement, we get a surprisingly solemn and soul-searching second-movement Andantino that seems to come out of left field and which Greilsammer performs with great sensitivity. The final movement is also surprising in that it contains a lovely minuetto right in the middle of an otherwise presto presentation. It’s like a miniature concerto unto itself, and again Greilsammer impresses us with his spirited direction and virtuoso performance.

To conclude the program we find two passages from Mozart’s Thamos, Konig in Agypten, K. 345, another early work, interrupted between passages by Denis Schuler’s In-Between, written in 2010, and, finally, the aria “Venga pur, minacci e frema” from Mozart’s youthful opera Mitradate, re di Ponto, K. 87, which he wrote around 1770 when he was only in his mid teens. Although the modern Schuler work strikes an odd note alongside the Mozart, I suppose that’s the point. Schuler tells us he intended it to sound like breathing, the sound going in and out. Fair enough; but there seems little connection with Mozart outside of Schuler’s title coinciding with Greilsammer’s. In any case, I would rather have heard two longer Mozart pieces on the disc than the one longer work and four shorter ones, but we have what we have, and it’s all pretty good.

Sony recorded the music at La Chaux-de-Fonds, Switzerland in 2011, and they did a good job of it, too. The midrange is clear and taut, with an exemplary transient response. Highs sound reasonably well extended, and while the bass doesn’t need much low end, it’s there when necessary. The orchestra displays a realistic depth of image as well as being suitably wide. In the Concerto, the piano seems ideally positioned just slightly ahead of the orchestra, and even if it tends to change in size from time to time, it is hardly noticeable. A very light, warm, ambient bloom complements the music making nicely.