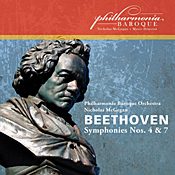 To begin, let me admit a bias: I’ve been attending performances of the Philharmonia Baroque Orchestra almost since the day they first started offering concerts in the San Francisco Bay Area over thirty years ago. They are, in my opinion, one of the best period-instruments ensembles in the country; nay, in the world. Needless to say, their present recording of Beethoven’s Fourth and Seventh Symphonies did not disappoint me. If you think my highly positive predisposition toward the orchestra colors my judgment, so be it.

First up, we get the Symphony No. 4 in B flat, Op. 60 (1806), the piece that often gets lost between the bigger and more popular Third and Fifth Symphonies. Compared to them, the Fourth Symphony may appear lightweight and something of a letdown for a lot of listeners. Fortunately, Maestro Nicholas McGegan and the PBO provide the Fourth such a vigorous and spirited presentation that it sounds better than ever. Their performance reminded me of Hector Berlioz’s description of the Fourth as “lively, nimble, joyous, or of a heavenly sweetness.” Like a recent recording by Joshua Bell and the ASMF, McGegan and the PBO take Berlioz’s depiction of the work to heart.

After an appropriately slow, sedate introduction (Adagio), the main Allegro vivace takes over, the tempo as vivacious and “vivace” as one could want, with hints of the Pastoral Symphony to come. You can almost see McGegan gleefully dancing through the movement (as is his wont; he’s a very animated conductor).

The second-movement Largo (one of Beethoven’s most relaxed) flows gracefully and sweetly along.  The Scherzo takes us through genuine Presto territory and leads to a finale that inevitably reminds us of the first movement, if at a slightly less-heightened step. McGegan forces the listener to reevaluate the symphony’s worth.

Beethoven wrote his Symphony No. 7 in A, Op. 92 in 1812, about half a dozen years after he wrote the Fourth. Critics sometimes identify it with characteristics of the dance (“The apotheosis of the dance,” as Wagner remarked), and it should certainly radiate a sprightly charm. Like the Fourth Symphony, the Seventh begins with a lengthy preface, this time bigger and grander, before the entrance of the main theme, again in a Vivace tempo. And again McGegan and his players reward us with well-judged speeds and rhythms, all of them springing to life with the utmost lyricism. McGegan does it up most heartily.

The conductor next takes the Allegretto at a healthy but not extravagant walking pace, this “processional in the catacombs” never turning into the full-fledged funeral march we often hear. Beethoven marked the body of the third movement “Assai meno presto” (very much less fast), which has led conductors to puzzle over it ever since. McGegan takes a middle course, and the whole thing winds up less hectic than some period conductors have played. 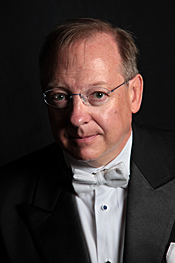 Then we come to the finale, which should sound wild and swirling without going all crazy and breathless. You can hear a snippet of it below, where McGegan shapes it perfectly: fast, energetic, and exciting, yet refined and cultured, too. The PBO’s account of the Seventh Symphony stands with the best, most-thrilling versions on record, on period or modern instruments.

The orchestra made the recording live during performances in 2012 (No. 4) and 2009 (No. 7) at First Congregational Church in Berkeley, California. I’ve listened to many a concert over the years at First Congregational, and I can attest to the recording sounding pretty much as I’ve always found the hall sounding. Which is to say, pretty good. However, by “pretty good” I don’t mean to imply that the recording is better than the PBO’s best non-live productions, like their Handel Water Music, Mozart Horn Concertos, or, especially, their Vivaldi Four Seasons, which are clearer, tauter, airier, more dynamic, and better focused. Nevertheless, as I say, both Beethoven recordings sound lifelike enough, with almost no audience noise. What’s more, the engineers edited out the applause after the first work, leaving only a burst of applause after the final piece, the Seventh Symphony. Perhaps in their next live production, they’ll eliminate the applause altogether. Or, who knows, since the applause is admittedly a minor detail, maybe I’m the only one in the world who disapproves of it interrupting my appreciation of recorded music. Of course, we expect applause at live events, and I have no objection; but a recording played in my living room is a different experience. Yeah, I know, picky, picky, picky.

Anyway, the present recording sounds warm and resonant, clearly a condition of the venue. There is a wide stereo spread, a quality of the microphone placement, no doubt, which needs to be relatively close in order to minimize audience noise. Inner detailing suffers a little from the natural reverberation of the church setting, and the high end seems a tad limited, perhaps because of the absorptive properties of the listeners themselves. Otherwise, the sound opens up nicely, with plenty of ambient bloom and at least a modicum of orchestral depth.