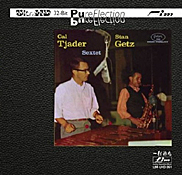 When you’ve got a good thing, there’s nothing for it but to make it better. That appears to be the philosophy of Winston Ma, president and owner of FIM (First Impression Music), who supervises the CD remastering of classic older recordings to today’s most-exacting audiophile standards. And what more classic a jazz album is there than Sextet, the celebrated 1958 recording with the all-star cast. To put it mildly, it’s never sounded better for home playback.

The players involved are Cal Tjader, vibes; Stan Getz, tenor sax; Vince Guaraldi, piano; Eddie Duran, guitar; Scott Lafaro, bass; and Billy Higgins, drums. Of course, not all of them were at the time as well known as they are today; but, still, it was a remarkable feat for Fantasy Records to gather them together for a one-time recording shot. No one figured just how memorable or how historic the occasion would be.

The session begins with “For All We Know,” which features Tjader on vibes and Getz eventually coming in on sax, the others providing accompaniment. It’s a good opening number to showcase the primary stars, and it’s wonderfully breezy and beautifully played. “My Buddy” follows, with even more from the bassist and pianist, again with Tjader taking the lead on vibes. The players had never performed before as a group, yet their contributions are so seamless, you’d think they had been working together for years.

And so it goes. This is jazz for people who say they don’t care much for jazz. I mean, how could one resist so affecting a number as their rendition of “I’ve Grown Accustomed to Her Face” from the then-new stage musical My Fair Lady? It’s all quite easy to grow accustomed to when every member of the ensemble is so thoroughly professional and skilled his position.

While much of the music is laid-back and genial, there is a particular track that finds the group at its rollicking best: a fast dance called “Ginza Samba.” They swing in the best sense, backing each other with supportive figures in a remarkably able fashion. Likewise, after starting the album in relatively lyric form, the fellows do the final three numbers up tempo. Pick your mood. 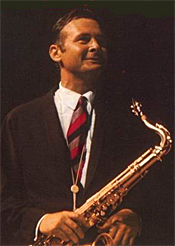 For fun, see if you can make out the words whispered in the background. Interestingly, too, there were no rehearsals before the recording date, no alternates, and second takes. Although the album lasts only forty-two minutes and forty-seven seconds, you can’t help but have a great time with it.


Fantasy Records made the album at Marines Memorial Auditorium, San Francisco, California, in February of 1958. FIM (First Impression Music) and their subsidiary LIM (Lasting Impression Music) brought the music to the present audiophile UltraHD CD in 2013, using the latest advances in 32-bit technology for the transfer. Moreover, as it seems that every time producer Winston Ma releases a new series of discs, he’s added some new and innovative engineering, this time we get something called Pure Reflection, or as Ma calls it, putting the two words together, PureFlection. It’s an improved disc reproduction process that makes replication even more precise, and which Ma goes on to explain in several pages of detail in the disc’s accompanying notes. Let it suffice that the technology seems to work, and we get what Ma claims is a pure reflection of the original. The disc sounds darned good, so I don’t doubt him.

The modestly close miking used in the original recording produces a wide stereo spread, and certainly the high-definition UltraHD and PureFlection systems produce pure, clean sound, no matter that the master tape is over half a century old. It was obviously good to begin with, and it sounds good now.  The disc opens with Tjader on vibes, which ring out clearly and dynamically. When he’s joined by Getz on sax, we hear how really lifelike the instruments sound. Percussion, including piano, likewise display excellent transient response, and both ends of the frequency spectrum appear well extended. Just as important, there is a fair amount of depth to the group, with air and space around the instruments. A good thing just keeps getting better.

FIM/LIM have packaged the disc in a glossy, foldout, hardbound book-like case, with notes fastened to the inside and the disc itself inserted into static-proof liner, further enclosed by a thin cardboard sleeve. The liner and sleeve make sense for taking the best possible care of the disc, although it can be something of a pain trying to get the liner back into the sleeve properly if you’re as clumsy and nearsighted as I am. It’s a small price to pay for dust and scratch protection.

And speaking of price, don’t forget that these audiophile products aren’t cheap. Don’t say I didn’t warn you in advance against sticker shock.