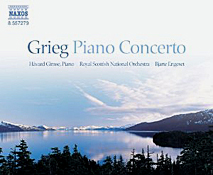 Naxos has always offered good value for the classical buyer’s dollar, as this album of Grieg’s music demonstrates. The performances and sound may not rank with the absolute best, but they’re close enough for most folks, I’m sure, and the seventy-one minutes of playing time provide plenty to listen to.

The opening movement of Edvard Grieg’s Piano Concerto in A minor, a staple of the piano concerto repertoire and therefore having many alternative rivals, is famous for its dramatic opening drum roll and cascading crescendos from the piano. Pianist Havard Gimse, Maestro Bjarte Engeset, the Royal Scottish National Orchestra, and the Naxos engineers nicely capture the theatrical effect of this opening, and, indeed, the whole of the first movement follows closely the excitement set out in the beginning. Throughout the work, Gimse follows this pattern in exemplary fashion. Tempos remain moderate but flexible; intonation is nuanced; transitions, as into the second subject, sound smooth and fluid; and Gimse seems always sensitive to Grieg’s designs.

The second movement comes across wonderfully hushed and continues to portray the beauty of nature as Grieg intended. It’s in the final movement that the Concerto itself begins to suffer, as the finale has never seemed to hang together well with the rest of the piece. The last movement is like a miniature concerto unto itself, very folksy in its outer sections and sweetly quiet in its middle. But it doesn’t have much to do with anything that went before it, and neither Gimse nor conductor Engeset can do much about that. In fact, by playing up the extremes, the performers only make matters worse. Oh, well; it’s not a serious complaint. 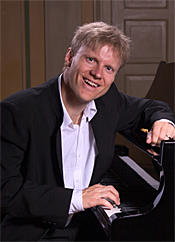 Accompanying the Concerto is the brief tone poem “In Autumn” and the suite of folk tunes called “Symphonic Dances.” They also come off well, very colorfully and pictorially presented, although I doubt that most buyers would be attracted to the disc by anything but the Concerto.

The Naxos sound is excellent in terms of the piano tone in the Concerto, very vibrant, clean, and alive. As for the orchestral sound, it’s a little less so, both in the accompaniment to the Concerto and in the coupling. I found it a bit lean in the bass and not entirely transparent in the midrange. Still, it’s more than adequate, broad and spacious.

Finally, I should mention that as good a bargain as this Naxos release is, one can still buy the two-disc, mid-priced Philips set that includes one of the best Grieg Concerto performances of all, with Stephen Kovacevich and Colin Davis, along with piano concertos from Schumann (Kovacevich), Addinsell (Dichter), Tchaikovsky (Argerich), and Brahms (Kovacevich again), making the Philips set one of the ultimate great bargains in the history of recorded music.