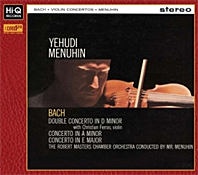 This recording by violinist Yehudi Menuhin from the late Fifties is probably my earliest encounter with Bach’s violin concertos, and it was fortuitous because Menuhin played them so well. After buying the EMI LP in the late Sixties, I had it until the advent of the compact disc era in the early Eighties, at which point it became a casualty of the transition. After giving the vinyl away, I had always meant to replace it with a CD copy, but it never happened. I suppose by then I had become rather fond of Baroque music played on period instruments (or “historically informed performances” as folks call them today), and I probably thought Menuhin too old fashioned for my taste. Listening to the recording again, however, newly remastered to audiophile standards by JVC and distributed by Hi-Q Records, was something of a revelation. I can see now why I liked it so much all those many years ago.

The album begins with Bach’s Violin Concerto in A minor, BWV 1041, which may have been the last of the three violin concertos the composer wrote, despite the catalogue number. Menuhin plays it with a flowing grace--Romantic by today’s standards, to be sure--but still lively. Unlike the practices of artists using period or modern instruments who try to emphasize the fast-slow contrasts they believe are most authentic by playing them ultra fast or ultra slowly, Menuhin sounds more cultured and refined for any of that, all the while providing the needed excitement in the music. Although we hear some of the dynamic variety we expect from a Baroque concerto, Menuhin doesn’t go to the extremes that some other violinists and groups currently favor.

Menuhin takes the first movement in a spirited manner; the slow middle movement in a serious, almost grave way; and the finale in a cheerful, fluid mode that skips along lightly and eloquently. All the time, the accompaniment by the strings and continuo offer him the utmost care and sympathy.

Next, we hear the Concerto for 2 Violins in D minor, BWV 1043, the “Double Concerto,” which Bach probably wrote somewhere between 1717-1723 and has long been a favorite of the public. Here, violinist Christian Ferras joins Menuhin in a fine pairing, their violin parts intertwining as a whole. They handle the opening Vivace movement in commendably animated style; the Largo is as lovely as any I’ve heard; and even with their relaxed speeds, the closing Allegro sounds energetic, echoing some of the composer’s Brandenburg work. Interestingly, the ensemble accompaniment more or less fades into the background on this one, practically disappearing from our notice. 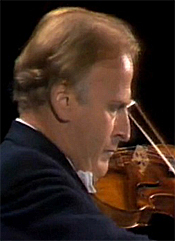 The Violin Concerto in E major, BWV 1042, has long been my own personal favorite among the three violin concertos, and I’d quite forgotten how charming it sounded in Menuhin’s hands. Again, with its well-known Brandenburg connections, there is a more gentle touch throughout than I’ve heard in most other renditions, and Menuhin appears more expressive than I remember; the Adagio more somber, thoughtful, and contemplative; and the final Allegro happier and more content. In all, it’s a splendid disc.

Incidentally, the album lists the accompanying ensemble as both the Robert Masters Chamber Orchestra as well as the Bath Festival Orchestra. To clear things up, I went to the Web site of the Royal Academy of Music, where we learn that violinist Robert Masters was a “keen observer of the career path followed by the legendary Yehudi Menuhin and recognised by the late 1950’s that what Menuhin needed most was a grouping of exceptional musicians to accompany him on recordings, on concert tours, and in festivals. Yehudi greeted the proposal with typical enthusiasm, and by mid 1958 Robert had brought together the players--all drawn from the foremost chamber music ensembles including the Aeolian and Allegri Quartets--for their first concerts at the Festival Hall and recording sessions in the studios of EMI. It became known over the next 20 years as the Bath Festival Orchestra and the Menuhin Festival Orchestra.” And, apparently, EMI sometimes listed it as the Robert Masters Chambers Orchestra.

Two of EMI’s top people--producer Peter Andry and engineer Robert Gooch--recorded the music in 1958 and 1959 at London’s Kingsway Hall, the venue EMI, Decca, and other companies used for any number of fine recordings over the years. Here, they captured the solo violin pieces a little brightly but extremely clearly and cleanly; and JVC, using their XRCD and K2 remastering and manufacturing processes, replicate it on disc about as well as I would imagine possible. They also got a wide stereo spread, yet without stretching the image too far beyond the speakers. It’s a natural, transparent sound, the violin nicely integrated into the orchestral setting, with a modicum of depth, air, and ambient hall bloom adding to the feeling of realism. The second of solo concertos, BWV 1042, actually sounds a tad smoother to me than the first, and the Double Concerto appears a touch darker.

The packaging from Hi-Q continues to look quite lavish, the disc fastened to a slick, hard-cardboard Digipak case with notes bound inside. Sure, the whole affair is expensive, and it’s not the kind of recording for which everyone would be willing to shell out; yet there’s no denying how good it is, interpretively and sonically.