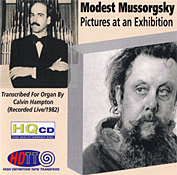 Originally, Russian composer Modest Mussorgsky (1839-1881) wrote his Pictures at an Exhibition in 1874 as a collection of piano pieces, each of the short movements describing a different painting or drawing by his friend, Viktor Hartmann. The composer’s idea was to create a series of tone poems as a tribute to the artist by depicting impressions of ten of Hartmann’s paintings hanging in a gallery and being viewed by passersby. All the same, Mussorgsky’s piano music never really impressed the public; then, many years later, Maurice Ravel orchestrated the music, and the rest, as they say, is history.

Over the years, we’ve had any number of good piano recordings of the work, but it wasn’t until the early Seventies that church organist Calvin Hampton transcribed the piano pieces for organ and recorded them for Musical Heritage Society. Since then, we have gotten a number of organ recordings. Still, it was Hampton’s controversial organ recording that people probably knew best, a recording as highly praised for its sound as criticized for its interpretation. Then, in 1982, recording engineer John Profitt heard that Hampton was performing the Mussorgsky piece on the organ in Rochester, NY, and figured he and his team could perhaps, in his words, “do Hampton’s masterful transcription better justice” than the earlier recording had. Thus, the impetus for the present recording, remastered here by HDTT (High Definition Tape Transfers).

Personally, I found Hampton’s realization of Mussorgsky’s tone poems somewhat lacking in color, in the drama behind the pictures. The organist appears more interested in what the music sounds like than in what the music represents. As a consequence, the performance seems to me too uncompromising for its own good, too devoid of life. Mussorgsky created little works of art, after all, to depict, well, little works of art. I’d have preferred the musician playing them to have brought those works of art more vividly to life. But, who knows, maybe I just don’t have enough imagination; for other listeners, Hampton’s readings may reveal a wealth of imagery. By the time the second “Promenade” rolls around, however, Hampton has warmed more to his subject. “The Old Castle” is appropriately eerie, “Tuileres” sounds charming, and “Bydlo” lumber along satisfactorily. “The Ballet of the Unhatched Chicks” comes to life more than almost anything else on the program, “Samuel Goldenberg and Schmuyle” argue convincingly, and “The Market at Limoges” seems lively enough. So, while Hampton doesn’t exactly light up the house with his playing, he is more than competent. It’s in the final four movements that I thought he lost some enthusiasm. “The Catacombs” and “Con mortuis mortua” seemed fairly perfunctory, and the big finish with “The Hut on Fowl’s Legs” and “The Great Gate of Kiev” haven’t the impact or splendor I expected, the former seeming rushed and the latter a bit shaky.

HDTT transferred the music from a 15ips 2-track master tape, recorded live in 1982 at the Ashbury First Methodist Church, Rochester, NY. Here, too, in the matter of sound quality we may find contention among listeners, with audiophiles perhaps loving it best of all and ordinary listeners bewildered at what the fuss is all about. Let me explain.

The remastering sounds quite clean and quite clear transferred to an HQCD as I heard it. Transient response is outstanding, with every note exceptionally taut, beginning and ending in a thoroughly well-defined manner. The mikes pick up very few hall reflections, so the organ notes have a kind of clinical precision about them. There is good depth in the hall, though, and we appear to be hearing the organ from a comfortable distance. There are some very deep lows involved, again very well controlled. Nevertheless, without out much hall reverberation, the bass may not seem as superficially impressive as the woolly low end we too often encounter in these affairs. More important, absent a severe mid-bass rise in the response, the rest of the frequency spectrum appears all the more transparent

Two things did annoy me slightly, however: Hampton’s arrangement and playing style occasionally elicit what I can only describe as a few squawks from the organ; they strike an odd note I did not find particularly attractive. Then there is the matter of the minor but noticeable audience noise, especially conspicuous between movements and during quieter passages. I could have done without it, along with the inevitable burst of applause at the end.

For further information about the various formats, configurations, and prices of HDTT products, you can visit their Web site at http://www.highdeftapetransfers.com/storefront.php.