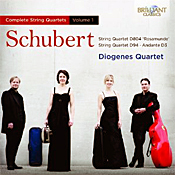 Yet, has any other composer in history written so much music in so short a time, most of which went unheard and unappreciated in the man’s lifetime? He wrote around a thousand works, mostly songs, some symphonies, liturgical pieces, operas, incidental music, and a large body of chamber and solo compositions. On the present disc, the Diogenes Quartet offer volume one in what promises to be a complete series of Schubert’s fifteen string quartets. Let us hope.

The Diogenes Quartet came together as a group in 1998 in Munich, Germany, and have been going strong ever since. They comprise Stefan Kirpal and Gundula Kirpal, violins; Julia Barthel, viola; and Stephen Ristau, cello. The group has been pleasing audiences not only with the classics but with new, modern music as well, and their crossover programs with a jazz quartet lead by former Diogenes founder Max Grosch have been major hits. The ensemble owes its name, by the way, not directly to the ancient Greek philosopher but to the Swiss Diogenes publishing company.

Anyway, Austrian composer Franz Schubert (1797-1828) probably wrote the early String Quartet in D, D94, with which the program begins, in 1811 or 1812, when he was in his early teens. Never mind the relatively high catalogue number, possibly a mistake. The work shows how much Schubert embraced the emerging Romanticism in music composition, as it is clearly well within the Romantic movement in spirit, complexity, themes, harmonies, and melody. Indeed, it is very typical of Schubert and points to the famous “Trout” Quintet to come. It bounces merrily along in the first movement, the Diogenes performers playing vigorously, robustly, yet with appropriate finesse. The main thing is that the players appear to be enjoying the music themselves, and their enthusiasm communicates to the listener.

The second-movement Andante con moto has a sweet lilt to it. The third-movement Minuetto swings cheerfully on its way, sounding the most “classical” of any of the movements in its design. Then, the concluding Presto closes the show in high style and good humor, again with the Diogenes performers in fine spirits.

The String Quartet in A minor, D804 “Rosamunde,” is the centerpiece of the album. It expresses an understandably greater maturity than D94, and at least in the beginning a darker, more melancholic mood. The D804 quartet was among the first of Schubert’s instrumental works performed publicly, and it’s the only one of his quartets published in his lifetime. It has a predominately gentle, lyrical quality to it, the music deriving its nickname from the composer’s incidental music (Entr’acte No. 3) for the play Rosamunde, which forms the basis of the quartet’s Andante. It’s also here that we notice most closely the similarities in the composer’s chamber pieces and his orchestral works. As always with Schubert, the whole thing abounds in beautiful, memorable melodies, which the Diogenes Quartet convey most pleasingly.

In between the two string quartets, the Diogenes players give us the little Andante in C, D3, a fragment Schubert left unfinished at his death. It makes a charming transition between the two longer works.

The Diogenes Quartet recorded the music in at the Himmelfahrskirch, Munchen-Sendling, Germany, in 2012. The sound is close enough to provide some good detailing yet not so close as to spread the four players clear across the soundstage. Still, a little more distance might have added a touch more resonance and air to the proceedings, which as they are tend toward the analytical side.