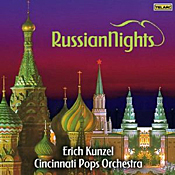 Erich Kunzel and the Cincinnati Pops Orchestra pretty much took over where Arthur Fiedler and the Boston Pops left off, both conductors and orchestras among the most popular classical recording artists of all time. Of course, it would have been nice to hear Kunzel conduct a single piece that lasted more than a few minutes, but, alas, it would not be on this album, something like his eighty-third Telarc disc.

This time Kunzel was doing Russian and Armenian composers, if not purely Russian or Armenian music. For example, the centerpiece of the album is Rimsky-Korsakov’s Capriccio Espagnol, which seems a little strange considering Telarc titled the disc “Russian Nights” and then features a composition of Spanish-inflected music. Oh, well; I suppose we get the idea. Almost everything on the disc is familiar territory, and while it is all neat and tidy, it is oddly flat. The performances seem to lack the last degree of flair and passion these red-blooded Russian works needed. The album reminded me that Georg Solti’s old collection of similar Russian showpieces exhibited more zeal and excitement than Kunzel brings to the table. Then, too, I couldn’t help thinking of Ataulfo Argenta’s 1956 rendition of the Capriccio Espagnol on a remastered LIM XRCD, a performance so overwhelmingly powerful and colorful, it was a hard act for Kunzel to follow.

Anyway, here we get things like Glinka’s Overture to Russlan and Ludmilla, Prokofiev’s March from The Love for Three Oranges, Borodin’s “Polovtsian Dances” from Prince Igor, Tchaikovsky’s “Russian Dance” from The Nutcracker, and Moussorgsky’s Polonaise from Boris Godunov. They all sound appropriately showy, but my favorite pieces were the less flamboyant ones: Anatol Liadov’s The Enchanted Lake and The Music Box, and the star attraction, Aram Khachaturian’s “Love Theme” from the ballet Spartacus. This latter music demonstrates the disc’s wide dynamic range as well as the music’s wide emotional range. The sonics are quite spectacular if, as we’ll see, also problematic. 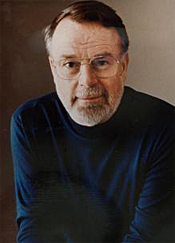 I began wondering as I listened to the Khachaturian if the wide dynamic range were not in itself some of the cause for the music sounding slightly earthbound. One has to turn the softest passages up in volume to appreciate them, and then the loudest sections knock you out of your seat. Now, I’m all for a recording displaying a realistically wide dynamic range, as long as it’s within reason. The result here, though, is that for the most part, you’re listening at too low a level and nothing seems to come to life except now and again. Add to this the fact that the Telarc engineers recorded the whole show in the smoothest possible manner at a moderate distance, and you don’t quite get the up-front, in-your-face presentations that these war-horses demand. The fact is, in terms of replicating a live experience, the wide dynamics would indicate a close-up seating position, while the smooth, warm response would indicate a greater distance. The contrast is a tad disconcerting.