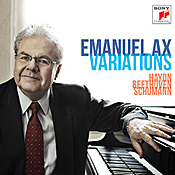 At first glance, I couldn’t help thinking of Emanuel Ax as one of the new guard of emerging classical pianists. Then I remembered that his “emergence” was back in the early Seventies, when people were first giving him the recognition he deserved. So, on further reflection, I suppose he has now entered the ranks of the old guard, joining his elder colleagues Alfred Brendel, Vladimir Ashkenazy, Maurizio Pollini, Martha Argerich, Byron Janis, and the like in the pantheon of great pianists of our day. In any case, it’s always good to hear a new album by Mr. Ax, this time playing three sets of variations by three different composers.

Ax begins the program with possibly the most-famous set of piano variations ever written, Beethoven’s Variations and Fugue for Piano in E-flat Major, Op. 35, “Eroica” (1802). The piece got its “Eroica” nickname because the composer based the main theme on that of the final movement of his Third Symphony, the “Eroica” Symphony, a theme Beethoven also used in some of his contredanses and in his ballet The Creatures of Prometheus. You might say he knew a good tune when he heard it. Although Beethoven originally planned to include thirty variations, he wound up with fifteen, plus the opening theme and a closing, summary finale, which Ax presents on the disc.

Not surprisingly, given the pianist’s unassuming style, Ax gives us Beethoven in these interpretations rather than Ax. That is, he does not impose any idiosyncratic gestures of his own but keeps the music as close as I imagine Beethoven intended it. The more straightforward Ax plays, the more lovely the music becomes. This is despite the fact that many of the variations are quite exuberant and outgoing, which Ax happily accommodates. Indeed, Ax plays these variations about as well as I have ever heard them played: spirited, nuanced, but never showy in any grand manner. The playing is delightful, the final variation especially touching. 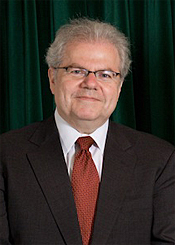 In Joseph Haydn’s Variations in F Minor, Hob. XVII:6 (1793) we encounter a musical world apart from Beethoven, one filled with subtle contrasts. The actual variations are not nearly so obvious as Beethoven’s, and the overall impression is one of reserve and restraint. Ax plays them with great refinement, a quiet dignity that is most appealing.

The album closes with Robert Schumann’s Symphonic Etudes, Op. 13 (1834-37), which are more Romantic sounding than either the Beethoven or Haydn sets, as we would expect. They also sound more complex, and Ax admits in a booklet note that they are difficult to play. Yet Ax performs them with clarity and polish, each of the variations exploring a different facet of piano playing. As a bonus, Ax includes five variations that Schumann left out of his original series.

Emanuel Ax made these recordings at the Academy of Arts and Letters, New York City, in 2012. The engineers miked the piano at a comfortable distance, so the instrument does not stretch clear across the room; instead, it presents a lifelike width for a listener sitting a moderate distance away. The piano exhibits a dynamic response, a natural, lightly resonant acoustic providing a warm glow on the notes. Still, transients sound quick and sharply detailed, with strong, clear, sparkling impact. In other words, what we get is a most-realistic piano sound.