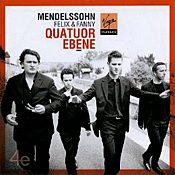 In all probability, most people even vaguely interested in classical music would recognize some of the music of Felix Mendelssohn (1809-1847), maybe bits of the Third or Fourth Symphonies or A Midsummer Night’s Dream at the very least. Even so, it’s doubtful those same folks would recognize much or anything from Mendelssohn’s older sister, the composer and conductor Fanny Mendelssohn (1805-1847). The two siblings were soul mates, however, and brother Felix would always let sister Fanny be the first to hear his newest compositions. Now, here’s the thing: Fanny wrote over 400 pieces of music herself, although given the times, her family would not allow her to perform them during her lifetime. To help remedy the situation to some small degree, the present album offers two string quartets by the more-famous brother and one by the sister.

As I said about the Ebene Quartet the last time I encountered them on disc, they constitute a fine group of performers who exhibit plenty of virtuosity, dash, charm, precision, and poise. The four members of this relatively young, French ensemble are Pierre Colombet, violin; Gabriel Le Magadure, violin; Mathieu Herzog, viola; and Raphael Merlin, cello. They have been playing together for several years now and are becoming quite well known, not only for their playing of classical music but for their performances of jazz, which led some critics to fear the two genres might come into conflict in the ensemble’s more-serious interpretations. Apparently, it hasn’t happened. Not here, certainly. The Ebene Quartet’s playing is as fluid and cultured as any I have heard, and if anything their interest in jazz has only helped hone the spontaneity of their classical skills, which remain smooth and sophisticated.

In any case, they begin the album with Felix Mendelssohn’s String Quartet No. 2 in A minor, Op. 13, a youthful work begun when the composer was still in his teens (begun around 1827 and completed in 1832). The composer wrote it in tribute to the death of Beethoven, basing it on a song he had recently written. Although No. 2 is an early work, it is quite mature in tone, and the Ebene Quartet play it with a simple, refined eloquence. The second-movement Adagio non lento is particularly expressive in the hands of these players, with a beautifully executed melodic line; and the Presto finale comes across with vigor, drama, energy, and, finally, repose.

Next comes Fanny Mendelssohn’s String Quartet in E flat major from 1834, which one notes immediately is quite a bit shorter than either of her brother’s quartets on the disc, almost by half. There is also a more plaintive, melancholic mood about the piece, evident from the start. Fanny attributed her inspiration to Beethoven’s late chamber works. The Ebene Quartet play it with an intense commitment, while maintaining a high quotient of gentle Romanticism. The Allegretto has an especially lilting charm, and the finale is a flurry of high spirits. 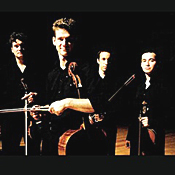 The program ends with Felix Mendelssohn’s String Quartet No. 6 in F minor, Op. 80, from 1847, a piece he referred to as his “Requiem for Fanny,” who had died that year. Felix would die that year as well. The quartet is an extraordinarily heartfelt work, and the Ebene players perform it with dignity and passion. Unlike what you might expect--for the piece to sound somber and funereal--it seems more filled with a striking anguish than anything else. Nonetheless, there is a touching Adagio to remind us of the composer’s bereavement, followed by an equally moving conclusion. The Ebene Quartet remind us throughout that this is a work expressive of grief and loss.

The venue in which the Virgin Classics engineers recorded the music in 2012, the Ferme de Villefavard en Limousin, France, seems ideally suited to the warmth and vibrancy of the Ebene Quartet and the music they make. The place is a converted granary in the tranquil French countryside, and what better an environment for the music of the Mendelssohns? The audio engineers miked things fairly closely, yet there is a good sense of place and space in the recording, with a fine touch of hall resonance and ambience. The quartet members do appear spread out rather widely across the speakers, making them sound somewhat larger than life; still, there is a good clarity about the sonics that more than makes up for any lack of ultimate realism. The violin sound can become a tad forward at times, too; it’s never out of character with the distance to the players, however, so it presents no problem. Detailing is always exemplary, and there is a good separation of instruments.