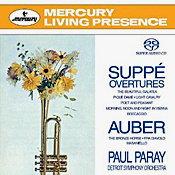 CD, DVD, DVD-Audio, HD-DVD, Blu-Ray, HDCD, HQCD, XRCD, SACD. If you’re like me, you probably keep up with most new technology, but you still have a hard time deciding what to buy. Well, some people in the music business seem to think that SACD still has a good chance of success because a number of record companies continue to release their recordings in the format. Of course, they’re hedging their bets by releasing their recordings on discs that contain two layers, both SACD multichannel and conventional two-channel stereo versions on the same disc, with a regular CD player handling the two-channel layer.

So it was with Mercury, who in the early 2000’s launched a series of Mercury Living Presence recordings in three-channel stereo. That’s the way Mercury originally recorded them before the engineers mixed them down to two channels. So, now we have the opportunity to hear them the way Mercury initially made them. That is, if you have a Super Audio Compact Disc player and a multichannel sound system. If you don’t, then you listen to the two-track recording as I did.

The packaging says that “in addition to the direct-to-DSD (Direct Stream Digital) 3-channel stereo, the disc includes a new DSD stereo, plus the original CD transfer.” Despite the clumsy wording, I assume this means that the two-channel recording is the same one supervised by recording director Wilma Cozart Fine for remastering in the early Nineties on Mercury’s first CD’s of this material, but here Mercury transferred it to disc via DSD. If that’s the case, I couldn’t hear a lot of difference in the sound, but it’s so good to begin with, it hardly matters. 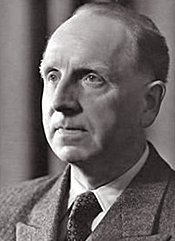 What does matter is that this disc of overtures by Franz von Suppe and Daniel-Francois Auber is probably the best you can find; maybe the best you will ever find in this repertoire. Paul Paray’s 1959 performances are not just spirited and lively, they are exciting, exhilarating, and intoxicating.Yet they never feel pushy or rushed. Moreover, they sound better than almost anything done today in the digital medium, the older recording’s dynamics, frequency range, orchestral spread, depth, and transparency all shining through brilliantly, with just a faint hint of background noise that is entirely unobtrusive.

If you are a first-time buyer who wants Suppe’s “Light Cavalry” or “Beautiful Galatea” or “Poet and Peasant” overtures or Auber’s “Fra Diavolo” among others, then this is a first-choice item, despite competition from Neville Marriner (EMI) and Charles Dutoit (Decca). And buying the album in the SACD edition makes sense even if you don’t have an SACD player because the new two-channel transfer is superb, maybe even a notch better than the earlier one. What’s more, the hybrid disc is only a few dollars more than the regular issue; and, who knows, you might buy an SACD player someday, and you’ll find yourself all set. The disc is a reference standard, plain and simple.

Email ThisBlogThis!Share to TwitterShare to FacebookShare to Pinterest
Labels: Suppe