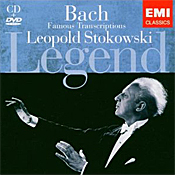 Leopold Stokowski was mere slip of a lad in his seventies when he made these recordings of Bach transcriptions in 1957-58 with his handpicked Symphony Orchestra. No doubt people still find his orchestral arrangements of works originally written either for solo organ or small baroque ensembles an acquired taste, to say the least; but they’ve been around for so long and people have come to know them so well, a lot of folks take them for granted as being entirely “Bach.” If you can keep from making that mistake, you’ll get more fun out of the music.

This two-disc set contains a seventy-minute CD of eleven of his famous Bach arrangements, plus a DVD of a 1972 performance of Debussy’s Prelude a l’apres-midi d’un faune, recorded live with the London Symphony Orchestra at the Royal Festival Hall, London. More about that in a minute. First, let’s have a brief look at the Bach, which begins with the Passacaglia and Fugue in C minor, continues with things like the “Little” Fugue in G minor, the “Air on the G String” from the Orchestral Suite No. 3, the “Preludio” from the Violin Partita No. 3 among others, and, of course, the celebrated Toccata and Fugue in D minor to close the show.

I prefer the old man doing the slower Bach items, Stokowski displaying a marvelous sensitivity and eloquence in the gentler music, although there is no denying that the big moments in the Toccatas come across with an excitement that is quite invigorating, too. Sure, the purists among us will continue to call Stokowski’s transcriptions corny or schmaltzy or commercial bastardizations of great music. Yet I’m not so sure that Bach himself wouldn’t have enjoyed them. Given the number of times Bach transcribed his own music for different instruments, I don’t think he’d mind what Stokowski did to it. Let’s put it another way: One should view Stokowski's arrangements of Bach as alternatives to the real thing, not as substitutes for them. One can go to the opera or symphony and still enjoy a good pop or rock concert. Well, some of us can. 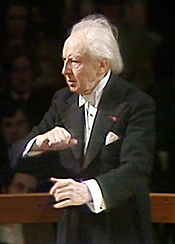 Best of all, EMI’s sound, now over a half a century old, is fairly good for its age--reasonably deep, firm, solid, and robust, somewhat compartmentalized perhaps, but well spread out across the stereo stage. I slightly prefer this sound in Bach to Stokowski’s later Phase-4 recordings for Decca, now also available on CD (in a five-disc box, which contains some really great things). Even though EMI’s late-Fifties’ sound may still seem highly engineered, it is a tad better focused and better imaged than Decca’s, if not quite so spectacular.

The accompanying DVD contains the Debussy; it’s done in color but in monaural sound. Still, it’s fun to watch Stokowski at ninety counting the beats and waving his arms about, without baton as was his practice from about 1929 onward. Interestingly, the booklet note says he returned to London to conduct the London Philharmonic, but the listing on the DVD says he’s leading the London Symphony Orchestra. Take your pick. Also on the DVD, and of equal importance, is a promo for EMI’s Archive series of DVDs, containing one or two-minute audio-video clips from over two dozen performances by great artists of the twentieth century. Name the performer, and he or she is probably here, from soloists to singers to conductors. But, unfortunately, although EMI gave them individual tracks, the company provided no menu selections for them and no listings in the booklet. They are fascinating to watch, but if you want to find something in a hurry, you’ll have to type up a listing of track selections for yourself.  Oh, well....