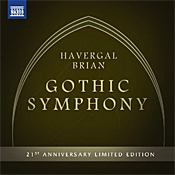 Havergal Brian (1876-1972) was one of those early-to-mid twentieth-century British composers who refused to believe that the Romantic Age had ended and continued producing music in the Romantic tradition until his death at the age of ninety-six (although, to be fair, the First Symphony uses elements from far-ranging eras, all the way up until his own day). He didn’t complete his Symphony No. 1 until 1927, when he was already in his late fifties, yet he would go on to write over thirty more of them before he died. You might say he was a dedicated man; or a compulsive one.

Brian subtitled his Symphony No. 1 “The Gothic” in part because he found inspiration in the Gothic Age (1150-1560), in the beginning of Enlightenment, and in the massive and imposing structure of Gothic cathedrals in general. Goethe’s Faust, written in the early nineteenth century, also inspired him, so the music owes a lot to previous generations. It also owes a lot to Bruckner and Mahler and probably a dozen other composers, as it appears to borrow from everyone, particularly other British composers like Elgar, Bax, and Vaughan Williams.

The Symphony has the distinction of being listed in the Guinness Book of Records as the world’s “largest symphony,” which is probably the main reason anyone remembers it today. Certainly, there are only a handful of Brian’s other works that anyone might remember. Brian wrote the First for performance by two complete orchestras, augmented by a battalion of choruses and soloists. At almost two hours and utilizing hundreds of players, it is enormous, indeed, one of the few examples in classical music of gigantic forces used to convey essentially spiritual themes.

Naxos recorded the music in 1989, releasing it on their full-price label, Marco Polo, re-releasing it on their Naxos label in 2004, and re-releasing it yet again on Naxos in the present 21st Anniversary Limited Edition in 2011. I recall trying to get through it when it initially appeared and giving up about twenty or thirty minutes in. This time I stayed the course, but I must admit it was still a chore. Brian divides the Symphony into two parts, the beginning purely orchestral, the second a new setting of the choral Te Deum. 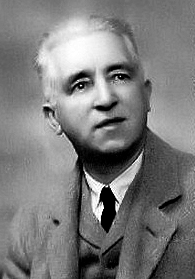 In its defense, the piece has a wonderfully propulsive style, always moving forward with great momentum and, obviously, with great weight. Unfortunately, it doesn’t really have much of anywhere to go in its two hours. It rather meanders from one huge, sometimes wearisome crescendo to the next, punctuated only intermittently in the choral sections by moments of serenity and repose. However, the “moments” are too often far and few between. I daresay a person could play back any one of the set’s forty-six tracks and have no idea where in the first or second half of the work it belonged or how it differed from every other point. Nevertheless, Maestro Ondrej Lenard and his massive forces give it their all, trying perhaps to turn a sow’s ear into a silk purse. In a way, that’s kind of fun, and for those listeners with the patience to hear it out, there are a multitude of minor pleasures along the way.

Fortunately, the sound is quite good, especially given the sheer size of the forces involved. Percussion, which is understandably prodigious, comes through clearly, with a strong presence; the choirs are often startlingly transparent and real; the dynamic range is huge; and the sense of depth is reasonably natural. Oddly, however, I never got a real feeling for the immense numbers involved. Oh, well, that’s a minor concern.

Email ThisBlogThis!Share to TwitterShare to FacebookShare to Pinterest
Labels: Brian