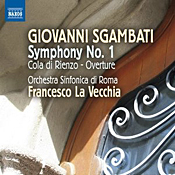 For more adventurous listeners (who don’t want to spend too much money to pursue their musical escapades), Naxos gives us some music by eighteenth-century Italian composer Giovanni Sgambati (1841-1914). Or maybe I should say Maestro Francesco La Vecchia gives us the music, as he seems determined to resurrect the tunes of as many obscure Italian composers as possible. In any case, you might find something of interest in Sgambati’s Symphony No. 1 in D major, Op. 16, and, who knows, if enough people show interest, maybe Naxos and La Vecchia will provide more of the man’s music.

As I say, La Vecchia has done this sort of thing before, taking nineteenth and twentieth-century Italian composers who made a mark in their own day and then became largely forgotten and recording their music for twenty-first-century listeners. The names of Alfredo Casella, Giuseppe Martucci, and Gian Francisco Malipiero come to mind because La Vecchia did a whole series of Naxos albums recording these men’s work. Maybe La Vecchia just has a soft spot in his heart for underdogs.

Anyway, here the conductor offers up two pieces by Sgambati, an overture and a symphony.  Appropriately, the program begins with an overture, Cola di Rienzo, which the composer based on the same poem by Pietro Cossa that had earlier inspired Wagner. Sgambati apparently wrote his overture as part of some incidental music for the poem, but he never published the music in his lifetime, and it subsequently disappeared until just recently. This may be its première recording; however, perhaps in a bit of modestly, the Naxos notes don’t say anything about it. Whatever, the overture is fairly long at over eighteen minutes and made up of a string of individual, stand-alone segments that proceed in a rather dour, solemn pace, with hints of the aforementioned Wagner in the background. It becomes more colorful as it goes along and, thanks to La Vecchia, more dramatic, too. 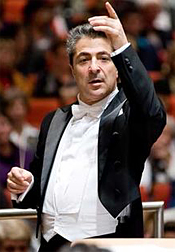 The centerpiece of the album is the Symphony No. 1, a five-movement affair consisting of a lively Allegro vivace; a dark Andante mesto; a cheerfully spirited Scherzo: Presto; a lovely and imaginative Serenata: Andante; and an elaborately embroidered Finale: Allegro con fuoco. Every section is melodious and rhapsodic, although it’s hard to discern any particular thematic centers to it nor remember much of it afterwards. While people like Toscanini and Wagner were fond of it (Wagner calling the composer “a true, great and original talent”), one can see why it never endured beyond its years. It’s all quite Romantic in style, with traces of Wagner again, Beethoven, Liszt and so on, even hints of Mendelssohn. Yet even though all of it is most pleasant, especially given La Vecchia’s loving attention, there is not a lot to take away from it nor a lot to draw one back.

Naxos recorded La Vecchia and his orchestra in the Auditorium di Via Conciliazione, Rome, in 2011. The sound they obtained is very smooth, warm, and soft, typical of many Naxos recordings. One can hardly fault it, yet it never seems to carry the weight, clarity, or dynamics of an audiophile recording. The sonics exhibit decent orchestral depth, though, and a sweet hall resonance.

Email ThisBlogThis!Share to TwitterShare to FacebookShare to Pinterest
Labels: Sgambati