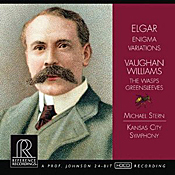 It seems a shame that most Americans probably know English composer Sir Edward Elgar (1857-1934) only for his Pomp and Circumstance March No. 1, and then only because so many people hear it played during graduation ceremonies across the country. But he wrote quite a lot of other orchestral material, too: marches, symphonies, concertos, and the like. This new recording from Reference Recordings gives us one of his other well-known works, the Enigma Variations, along with Ralph Vaughan Williams’s The Wasps suite and the Fantasia on “Greensleeves.” Although one can certainly find a multitude of other available recordings of these pieces, few of them combine the expert performances and audiophile sound we find here.

The program begins with The Wasps, subtitled Aristophanic Suite, by English composer and folklorist Ralph Vaughan Williams (1872-1958). Yeah, the first thing I did when I heard this music years ago was look up “Aristophanic.” Seems the word wasn’t as hard as it sounded; it simply refers to Aristophanes, the ancient Greek satirist who liked to skewer Greek society. The Wasps was Vaughan Williams’s first stage work, and it includes a number of traditional British folk tunes, which Maestro Michael Stern and his Kansas City Symphony play with high good spirits. It’s fun stuff, especially the overture, which begins with sounds of a swarm of wasps.

Next, we find the Fantasia on “Greensleeves,” a coupling by Ralph Greaves of two of Vaughan Williams’s arrangements of the famous ballad. The “Greensleeves” melody has been around seemingly forever, a booklet note suggestig that the first mention of it in print occurred as far back as the sixteenth century. It undoubtedly predates that time period considerably. Today, listeners probably know Vaughan Williams’s orchestral arrangements of the tune as well as any version it. Stern takes his time to get the full measure of the work, yet he never lags or dawdles. It’s quite beautiful.

The final piece on the disc is the Enigma Variations, Op. 36, by English composer Edward Elgar (1857-1934). Elgar premiered it in 1899, making it his first big success. He began these fourteen variations by writing an improvisation and then continued to toy with it, bringing into the work all kinds of clever, hidden, and not-so-hidden meanings. Stern plays each of the movements fairly straight, attempting to make each one of them as entertaining as he can. Perhaps Stern’s interpretation is not quite in the same exalted league as the classic accounts by Sir Adrian Boult (EMI) or Sir John Barbirolli (EMI), but it’s a very fine reading just the same. 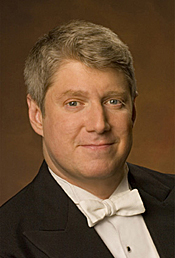 Maestro Stern brings out all the color, picturesqueness, and delight the Enigma Variations have to offer. Moreover, there is a serious air of mystery around the music. The conductor also seems to delight in the score’s contrasts, emphasizing the composer’s lyrical charm, brawny athleticism, and stately, aristocratic grace.

The Reference Recordings team of producers and engineers, which includes producer David Frost, recording engineer Keith Johnson, and executive producers Tam Henderson and Marcia Martin, recorded the HDCD at the Community of Christ Auditorium, Independence, Missouri, in May of 2011. As always, the folks at Reference Recordings trade off a little something in the way of ultimate transparency in favor of a more lifelike presentation. You are very much in the audience for this one, sitting in the auditiorium. They do the miking at a reasonable distance, not too close, not too far away, capturing a smooth, warm response, with a pleasant hall resonance. One senses an excellent depth, air, and dimensionality to the sound, the bass deep and taut, the highs well extended. Just as important, there’s a wide dynamic range and a strong impact involved. Indeed, the range is so wide that much of the music may appear at times too low in volume, encouraging you to turn up the gain, which might not be the best idea when the loudest passages come around. Anyway, you’ll find a comfortable setting with a little fiddling of the dials and soon settle in to a most-realistic listening experience.