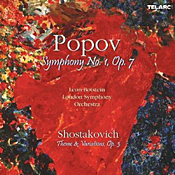 Here’s another name, Gavril Popov, that might not be too familiar to all music lovers. He was a Soviet composer (1904-1972) who never really got much of a chance to show his stuff in the repressive regime of the 1930’s, 40’s, and 50’s when he was in his prime. The conductor on this Telarc release, Leon Botstein, in a booklet note says that Popov’s Symphony No. 1 “fits into the category of great music in the orchestral repertory that requires advocacy.” In other words, since nobody knows about it, somebody’s got to speak up for it. Thus, the Telarc recording.

The First Symphony had exactly one performance, in Leningrad in 1935, and the Soviet musical censors immediately banned it as being too “formalist,” meaning it didn’t conform to the government’s ultraconservative musical tastes. Apparently, no one ever performed it again in Popov’s lifetime, and folks only rediscovered it and played it again a few years ago. It has still not caught on, much to the annoyance of Maestro Botstein.

One can understand, however, why not everyone in the world knows the piece. It’s gloomy as hell. The Symphony is in three movements, which the composer described as representing “1) struggle and failure, 2) humanity, and 3) the energy, will and joy of the victor’s work.” Interestingly, the three movements get progressively shorter as they go along: The massive, hectic first movement, an Allegro, is over twenty-three minutes long; the slow second movement, a Largo, is sixteen minutes; and the quick third movement, a Scherzo, is nine minutes. I assume the composer intended for the music to diminish in length by 3-2-1 to reinforce his musical themes, but I’m not entirely sure why. 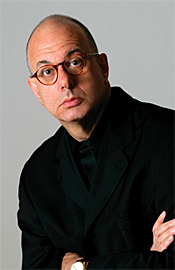 In any case, the whole work is full of conflicts and contrasts, which seem to delight Maestro Botstein. The first movement alone has enough ideas in it to fill three symphonies, including a slow middle section that comes out of nowhere and leads to the “failure” indicated by the composer. This first movement begins with a big bang, goes on through all sorts of gymnastic convulsions, and ends with a repeated whimper, fading into nothingness. The second movement is so melancholy it would leave Jack Nicholson’s Joker with a frown. And the third movement seems actually to be bouncy and, in its odd way, cheerful. I guess that’s what Popov meant by “joy.”

Accompanying the Popov First Symphony is as opposite a piece of music as one could imagine, Dimitri Shostakovich's Theme and Variations, Op. 3 (1922), a student work that no one ever performed during Shostakovich’s lifetime. It is very much in the lightweight vein compared to the tumultuous Popov piece, the Shostakovich smooth, straightforward, and romantic, almost chamber-like in tone.

The Telarc sound is every bit as good as their finest recordings: very natural, very dynamic, very wide ranging, the percussion especially impressive, and the big bass drum making its presence felt all through the First Symphony. Everything comes together to make a fascinating if not wholly satisfying album: the first-rate sound, the obscure First Symphony, and the virtually unknown Variations. Well, it’s different.

Email ThisBlogThis!Share to TwitterShare to FacebookShare to Pinterest
Labels: Popov