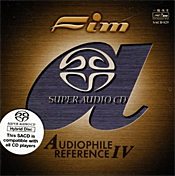 There is no doubt that FIM, First Impression Music, is first and foremost an audiophile label. Its president and producer, Winston Ma, is a dedicated audiophile for whom sound is everything. Fortunately, he is also a music lover and recognizes good music. Therefore, the contents of his discs must not only sound good, they must be worth an enjoyable listen.

The Audiophile Reference IV disc is a Super 24-Bit hybrid SACD, meaning the folks at FIM have done it up in one of the premier processing modes around, and because it’s a hybrid disc, you can play it on an SACD player or on regular CD player. As the album’s title implies, it contains bits and pieces of audiophile material, much of it taken from FIM’s catalogue of XRCD material, the kind of stuff that dyed-in-the-wool audiophiles sit around and listen to when they’re not talking over the top of the music. I’m not really keen on these kinds of compilations because there is never enough of any one thing to interest me, but when we get the kind of sonic results heard here, it’s hard not to want to see what new delights are around the next corner. Kind of like popcorn; you can’t just eat one. 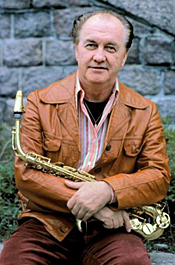 There are sixteen tracks on the disc, comprising over seventy-five minutes of music. Selections include everything from classical to jazz to folk, but thankfully no hard rock or rap. Among the highlights for me were Saint-Saens’s lovely “The Swan” from his Carnival of the Animals; a composite group of tunes and noises on “Olde London”; a traditional Chinese set of variations called “Yang City”; excerpts from Handel’s Messiah; and Pachelbel’s Canon in D done by a percussion ensemble. Well, everyone else has done it on every other kind of instrument, so why not percussion.

The sound in each of the numbers is outstanding, particularly in terms of timbre and clarity. At times, I felt that maybe a piece was a bit too forward or too aggressive, but after a moment’s listening I usually found it sounded, in fact, just right. The only direct comparison I was able to make was with the live recording “High Life,” featuring Swedish sax player Arne Domnerus; it’s a selection FIM remastered from the celebrated Proprius disc Jazz at the Pawnshop. Comparing the FIM version with an original, first-generation pressing of the Proprius disc, I found the Proprius sounding maybe a bit brighter, the FIM sounding deeper, smoother, and more naturally balanced. That they did not sound more alike, though, was probably my biggest surprise; I hadn’t expected such a difference. In any case, the FIM was mighty good and sounded remarkably real.

To hear a brief excerpt from this album click here: