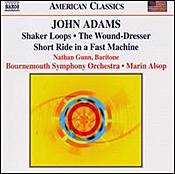 It’s not hard to understand why composer John Adams’s (b. 1947) Shaker Loops is one of this modern composer’s most popular works. As conductor Simon Rattle has explained, Adams’s music has “always seemed to be moving forward in space, that I would imagine while listening to it that I was in a light aircraft flying rather fast, close to the ground.” Very true. Adams’s tunes have a wonderful forward momentum, and in Shaker Loops, especially, a strong rhythmic beat.

The present album contains four works quite different from another, particularly for a composer best known as a minimalist. The disc begins with a real barnburner, “Short Ride in a Fast Machine.” Two minutes into this thing and I felt as though I were back on Northern California’s coastal Highway 1 in my 350Z. It’s very exhilarating (the music, as well as the Z), Alsop conducting the Bournemouth Symphony with all stops open. Following this high-octane piece are two downers, “The Wound-Dresser” and “Berceuse elegiaque,” both slow and rather gloomy affairs, the former a musical setting for Walt Whitman’s poem of the same name. Can’t say I enjoyed either work too much, but maybe I was in a bad mood before I started. If I wasn’t, these two numbers would have assured it. 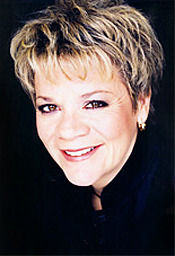 The main piece of music on the disc is the four-movement Shaker Loops from 1978, which has rightly made Adams famous. “The Loops,” writes Adams, “are small melodic fragments whose ‘tails,’ so to speak, are tied to their ‘heads,’ creating loops of repeated melodies....” The “Shaker” part of the title derives from Adams’s attempt to recreate the feeling of a Shaker religious ceremony as they shake in religious ecstasy and divine meditation. The final movement has always reminded me of the film music of Bernard Hermann, something out of Psycho, for instance.

The Naxos engineers capture all of the shaking and trembling and pulse of the music, much of it percussive, in one of their very best recordings. They miked the orchestra fairly closely, producing excellent definition and impact. Indeed, listeners with playback systems too bright or too hard may not appreciate the immediacy of the recording, but those with generally well-balanced systems should find the recording eventful, to say the least.

Email ThisBlogThis!Share to TwitterShare to FacebookShare to Pinterest
Labels: Adams