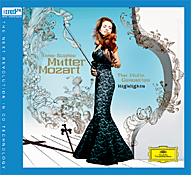 German violinist Anne-Sophie Mutter made her recording debut in 1978 at the age of fifteen playing Mozart’s Violin Concertos Nos. 3 and 5 with the eminent conductor Herbert von Karajan; one of the world’s great orchestras, the Berlin Philharmonic; and the prestigious record label Deutsche Grammophon. Several years later, she recorded Nos. 2 and 4 with Riccardo Muti and the Philharmonia Orchestra for EMI. It was an auspicious beginning to her recording career to say the least, and she has never looked back, now recognized as one of the leading performers in her field. About a quarter of a century later, in 2003, she recorded all five of the Mozart violin concertos again, this time with the London Philharmonic, which she also conducted. The present, 2012 disc presents three of those concertos on a JVC remastered XRCD24/K2 audiophile disc.

The disc’s title is actually Mozart: The Violin Concertos (Highlights), but I think the designation “Highlights” is misleading. It makes it appear as if there are only portions of the concertos involved when, rest assured, we get three complete violin concertos. It’s just that originally DG issued the five concertos along with the Sinfonia concertante in a two-disc set, so this single-disc audiophile release contains only three items from that bigger package; thus, the possibly confusing “Highlights” tag.

The two big questions, of course, are whether Ms. Mutter’s newer interpretations improve upon her early ones and whether JVC’s remastering is worth the money, both highly subjective judgments. Let’s start with the performances.

The newer interpretations have plenty of zip and thrust and a greater rhythmic bounce than the earlier ones. Ms. Mutter entertains slightly quicker tempos than before, perhaps as a nod to the period-practice crowd. Still, these are essentially gentle, cultured, mature, and lyrical readings, never overstepping the bounds of tradition. The older performances seem a modicum more reserved, more classical in tone. Moreover, the slow movements in the newer performances are as heartfelt as ever, so there is really nothing lost, unless it’s the more Romantic, dreamy-eyed sentiment of Muti and Karajan. If anything, Ms. Mutter is today better able to make her violin cry out in joy and passion. Her intonation, phrasing, style, and delivery are, as always, spot on, graceful and articulate.

All I can say about the JVC remaster is that the disc ain’t cheap, but it sure sounds good. Unfortunately, and here’s the rub, while I usually have the original discs for side-by-side comparisons, this time I did not have the regular DG set available. What I did have were Mutter’s old Muti (EMI) and Karajan (DG) discs, as well as the knowledge that in my prior experience every XRCD I’ve ever compared to its original counterpart has sounded better (although in some cases just barely). I have no reason to think the same isn’t true here. 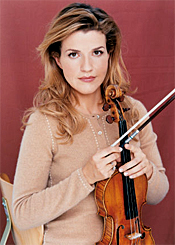 Sonically, the JVC XRCD24/K2 remaster sounded superior to the Muti and Karajan in every way but one: The Muti recording seemed a touch more dimensional. The engineers miked the newer Mutter performances a bit closer than either the older EMI or DG, thus losing a very little something in orchestral depth; be that as it may, the closer sound reproduces a truthful air and space. In every other respect, the JVC product sounded best. The newer recording is clearer and cleaner for one thing, with a fine sense of presence and occasion. It also displays a greater dynamic range, a stronger impact, and a sharper transient attack. In the matter of frequency balance, the JVC is more neutral, the older recordings a touch brighter and less natural. There is also in the JVC a realistic bite on the violin sound, yet without any forward edge or hardness. More important, the JVC remastered sound appears smoother and firmer than the older sound, more lifelike all around.

In a nutshell, if you like Ms. Mutter’s earlier interpretations of the concertos, you will no doubt like her newer ones as well; they may lose a little something in formal classical feel and design, but they make up for it in joyous spontaneity. In terms of sound, the JVC remaster is hard to fault; it’s a tad close but sleek and polished, with no hint of distortion.

Just remember, the JVC disc isn’t for everyone; you can buy DG’s two-disc set much cheaper than this single disc, and I cannot even vouch absolutely for the JVC’s sonic superiority; therefore, I could not in all conscience recommend the remaster without qualification. JVC clearly intend the product for well-heeled audiophiles. What’s more, you may have trouble finding it for sale, short of ordering it from Europe or Japan, where it would be more prohibitively expensive given the shipping costs involved. Nevertheless, if you’re really intent on pursuing it, several places you can buy JVC XRCD’s in the U.S. include Elusive Disc (http://www.elusivedisc.com/) and Acoustic Sounds (http://store.acousticsounds.com/).