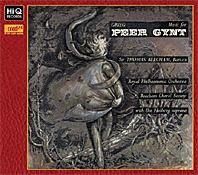 It wasn’t too long ago that I listened to and recommended the low-priced EMI reissue of this incidental music for Grieg’s Peer Gynt performed by Sir Thomas Beecham and his Royal Philharmonic Orchestra. The recording first appeared on LP in the late Fifties, and EMI subsequently reissued it on LP, cassette tape, and CD over the years. Now we find it in yet another incarnation in the Hi-Q Records XRCD/K2 series of audiophile discs. The interpretation oozes the usual Beecham charm, long one of my favorites in this music, and the sound is obviously better than ever.

No, Beecham does not give us all of the music Norwegian composer Edvard Grieg (1843-1907) wrote for Henrik Ibsen’s play, Peer Gynt. Beecham provides about forty-two minutes’ worth. If you want the complete incidental music, you’ll have to turn to people like Per Drier on Unicorn or Neeme Jarvi on DG. Beecham’s extended selections are more like the suites, which you can find on any number of fine recordings. What Beecham brings to the table is his characteristic twinkle, lighting up the music with enchantment and charisma aplenty. And, naturally, the extended selections include Grieg’s most-famous movements: “Wedding March,” “Ingrid’s Lament,” “In the Hall of the Mountain King,” “Morning,” “Ase’s Death,” “1st Arabian Dance,” “Solveig’s Song,” “Anitra’s Dance,” “Return of Peer Gynt” (Storm Scene), and “Wiegenlied” (“Solveig’s Lullaby”).

What the Hi-Q disc does not include are Beecham’s recordings of the Symphonic Dance, the overture In Autumn, and the Old Norwegian Folksong with Variations, which EMI later added to fill out their reissued CD. These selections did not appear on the original LP, which is all that Hi-Q offer. Given the high price of the Hi-Q product, some potential buyers may understandably be annoyed at the short, forty-one minute playing time; just think of the disc as offering quality over quantity. If you’re looking for something less expensive, I’d suggest the EMI Beecham disc, Raymond Leppard’s Philips recording of the two suites, or Oiven Fjeldstad’s Decca issue of highlights.

The sound of the Beecham recording belies its 1957 production date, when EMI made it in Studio No. 1, Abbey Road, London. Hi-Q have remastered it using JVC’s XRCD24/K2 processing, a technology I’ve described in the past that is meticulous, time consuming, and costly. It results in the best possible transfer of information from a master tape to a compact disc, but, as I say, it ain’t cheap. 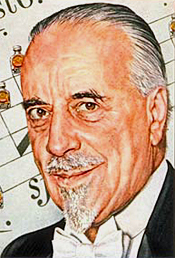 As always when I have the opportunity, I put the new audiophile Hi-Q edition in one CD player and the regular-issue EMI CD in another for instant comparisons, trading out the discs from time to time to be sure I was listening to the sound of the discs and not to the sound of the players (although, to be fair, the players sound practically identical). The first thing I noticed in the comparison was that the Hi-Q disc sounded slightly smoother, with slightly better definition and separation of instruments. Next, I noticed that the Hi-Q product was slightly firmer and clearer overall; it was slightly less veiled, as though removing a fine layer of gauze from the sonics. I also noticed that the Hi-Q sound was slightly stronger in dynamic range and transient impact, with slightly more-extended highs and slightly tauter bass. By contrast, the EMI disc, already quite good, sounded slightly softer, less forceful, and less transparent. Be aware of the word “slightly” here; the differences are not night-and-day.

I noticed a touch of background noise in both masterings that is the merest shade more pronounced in the Hi-Q edition. Also, the vocals on the Hi-Q are sometimes a bit brighter, edgier, and harder-sounding. We might expect the better mastering to display more greatly any small deficiencies in the original tape, and that’s what happens. Nevertheless, these are such minor concerns, they are hardly worth mentioning in so fine an edition.

The Hi-Q packaging, too, is first-rate. The disc comes housed in a Digipak-type container, with a cardboard cover and back, bound text and pictures in the center, the CD fastened to the inside back cover. With its glossy coating and original cover art, the package couldn’t look better.

Note, however, that remastered audiophile discs are not for everyone; the differences between the sound of better masterings and pressings and the equivalent regular releases are usually so small that most people probably wouldn’t notice them. Remastered audiophile discs are for well-heeled connoisseurs attempting to squeeze the last ounce of fidelity from their stereo systems. It’s here that audiophile remastering companies such as Hi-Q, FIM, JVC, HDTT, and the like fill a need, providing the best-possible product regardless of price.