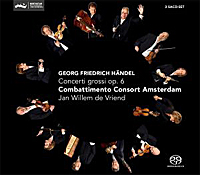 The concerto grosso (or “grand concerto”) was an important type of Baroque concerto, characterized by the playing of a small group of solo instruments against the full orchestra. The form originated somewhere in the mid-seventeenth century and eventually evolved into the traditional concerto and symphony we know today.

German-born composer George Frideric Handel (1685-1759), who spent most of his life in England, published his twelve Concerti grossi in 1739, originally writing them to be played during his oratorios and odes, usually between acts, meant to sort of break up the continual singing, in the manner of an entr’acte. I suspect he also inserted them into his choral works to show off his versatility as a composer. Maestro Jan Willem de Vriend leads the Combattimento Consort Amsterdam (a chamber group of several dozen or so players at any given time) in spirited readings of all twelve works in this three-disc set.

Each of the twelve concerti grossi contains from four to six movements, most of them beginning with largos or larghettos. According to their publication dates, Bach seems to have written them over a remarkably short period of time; however, since he borrowed a good deal of material from himself (and others), the dates are probably misleading. This is not to suggest there isn’t a lot of purely original ideas here, too; you just have to understand that reusing older compositions in newer settings was commonplace in those days.

Still, the music’s the thing, and these performances from De Vriend and the Combattimento Consort, stylish and imaginative, are as good as they get. Each Concerto grosso is clearly different in character from all the others, and De Vriend makes sure the listener appreciates those differences. He varies tempos and sustains lively rhythms just enough to make his case without resorting to exaggeration. He always maintains a sprightly bounce in the faster movements while keeping a refined, sometimes stately pace in the slower sections. I have to admit, however, that there were a few times when I wished De Vriend would have eased up just a little on the forward drive and momentum; a little energy is good, but so is a little repose. Be that as it may, this is but a minor concern in a set so well considered.

In all, I found the ever-so-brief Concerto grosso No. 4 coming off well for its quiet, bittersweet dignity; and the much longer, more French and Italian-influenced No. 5 coming off nicely in a stately, ceremonial manner. No. 6 is not as dark as I’ve heard it performed, which can be good or bad depending on your expectations. No. 8 seems the best example of any of the pieces for showing off Handel’s versatility and creativity, as well as displaying the individual talents of the Combattimento Consort. Nonetheless, my favorite among all twelve of the Concerti grossi is No. 12. Maybe Handel was saving his best stuff for last, I don’t know. But the music has always moved me, and I greatly enjoyed De Vriend’s sensible yet stimulating approach to it. 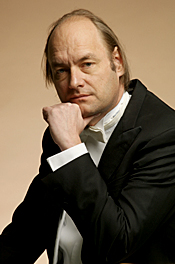 Northstar Recording Services recorded the music in 2011 at the Muziekcentrum Enschede, Netherlands. Producer and engineer Bert van der Wolf used the “High Quality Musical Surround Mastering principle” in making this hybrid stereo/multichannel SACD. The basis of the recording principle offers “a realistic and holographic 3 dimensional representation of the musical instruments, voices and recording venue, according to traditional concert practice. For most older music this means a frontal representation of the musical performance, but such that width and depth of the ensemble and acoustic characteristics of the hall resemble ‘real life’ as much as possible.” I suppose that means it helps to listen to these discs in full 5.1 surround sound from an SACD player to take complete advantage of the principle, but I did just fine with an SACD player and two-channel stereo.

So, anyway, how does it sound? Well, the sonics may be a tad bright or forward if your speakers are at all bright or forward. Otherwise, there is little to complain about. It’s fairly close-up, very clear, very well detailed, yet there is also a good degree of depth to the small ensemble. Dynamics are strong, adding to the sense of realism. Perhaps of greatest importance, the stereo spread extends almost but not quite from speaker to speaker, so there isn’t just a long line of instruments in front of you. Although the acoustic is not over-resonant, it does provide a warm, pleasing glow around the notes, which never disturbs the sound’s transparency. Played at an appropriate volume level for this type of music, the experience can be entirely natural and will have you sitting in the audience, it sounds so good.

The three discs come handsomely packaged in a double jewel box, with a slipcover for the case and an enclosed booklet of extensive notes.