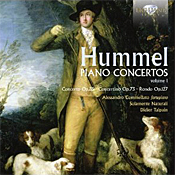 Some guys can’t catch a break. Take Johann Nepomuk Hummel (1778-1837). He’s like the Alex Smith (deposed starting quarterback of the S.F. 49ers) of classical music. Hummel was extremely popular in his day, but it wasn’t long after his death that his music faded into obscurity. While the Trumpet Concerto and a few of the piano concertos continue to get some love, it isn’t much. The fellow wrote at the very end of the Classical Period at a time when listeners were looking toward composers of the new Romantic Age. Hummel apparently never adapted well enough to survive, and audiences passed him by. Now, Brilliant Classics are doing their part in reminding us who Hummel was with this first volume of his music, all of which they say are premiere recordings on period instruments. Let’s hope it works out for them.

Let me begin by telling you about the little Piano Concerto in G, Op. 73, even though the disc places it second on the program. It’s a delight, sounding a lot like Mozart. In fact, if you didn’t know every Mozart piano concerto by heart, you’d probably swear it was early Mozart. Played on period instruments by Solamente Naturali (“only natural”) heightens the illusion. Hummel published the Piano Concerto in G in 1816 but adapted it from a mandolin concerto he wrote in 1799. Under Maestro Didier Talpain and pianist Alessandro Commellato (who plays on vintage fortepianos, an 1825 model for the Concerto in G and an 1837 model for the Concerto in A minor and the Introduction & Rondo), the performance is light, bouncy, airy, simple, and direct. It should have a wide appeal.

The Piano Concerto in A minor, Op. 85, which opens the program, is one of Hummel’s best-known concertos; it dates from around 1816, and the composer published it around 1821. Here, we find a full orchestra and many more Romantic leanings. It’s much closer to Chopin and Liszt than to Mozart. The first movement starts with so lengthy an introduction that one might ask, Now eventually you do plan to have a piano in your piano concerto, right? Finally, about four minutes in, the piano enters. This time, Commellato’s playing, adapting to the tenor of the piece, is more mature, the Allegro Moderato appearing remarkably like Chopin’s First Piano Concerto. That’s not surprising, considering that toward the end of Hummel’s life he became a kind of mentor to the younger pianist and composer. Commellato also provides a more virtuosic performance here than in Op. 73, the more-complex music of Op. 85 giving him more opportunity for dexterous finger work. The fortepiano from 1837 has a slightly richer, mellower tone than the earlier one, too, reinforcing the lush Romantic connotations. 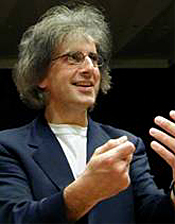 The album concludes with the Introduction & Rondo brillant in F minor, Op. 127. Written in 1833, it would be the last of Hummel’s works published in his lifetime. The mood changes altogether in the opening movement, this one somewhat dark and heavy. It’s still well within the Romantic genre, yet in a rather somber, melancholic vein. Then, in the second movement things brighten up considerably, with Commellato handling both temperaments handily. All three items on the disc offer dazzling performances, possessing grace and energy and polish aplenty.

Brilliant Classics recorded the music at the Studio of the Slovak National Radio, Bratislava, Slovakia in 2010. The music they obtained is a tad close for my liking, but it is wonderfully open and detailed, and the clarity is often exemplary. Although depth is only middling, the stereo spread is impressive, the dynamic range is ample, and the impact good. A little more distance, though, would have provided a more-resonant response, so the sound goes more in the direction of ultra-transparency than it does for concert-hall realism. The sound of the fortepianos displays excellent transient lucidity and sharpness of attack, even if it’s a bit too wide to be entirely lifelike.

To hear a brief excerpt from the Piano Concerto in G, click here:

Email ThisBlogThis!Share to TwitterShare to FacebookShare to Pinterest
Labels: Hummel