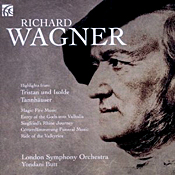 Every time I hear an album like this one of Wagner highlights, I think of the famous line by British music analyst, conductor, composer, and pianist Sir Donald Tovey, who wrote in 1935, "Defects of form are not a justifiable ground for criticism from listeners who profess to enjoy the bleeding chunks of butcher's meat chopped from Wagner's operas." Dedicated Wagner fans, Wagnerites, tend to use the comment to denigrate anyone who enjoys listening to selections from Wagner's operas, arguing that to appreciate fully the composer's work, one has to listen to it in its entirety. Fair enough. Except that there are also a good number of people who find Wagner's operas long-winded and tiring, most of these folks simply enduring with patience the long stretches between what they consider the good parts. I don't suppose either group will ever understand or accept the other's point of view. In any case, what we get here from conductor Yondani Butt and the London Symphony Orchestra are "bleeding chunks," for better or for worse.

I was not familiar with Maestro Butt's work until I heard his recording of the Beethoven Third Symphony in the fall of 2011. I found it surprisingly refreshing; perhaps not in the same league with a Klemperer, Barbirolli, Bernstein, Bohm, or Zinman, but certainly worthy of a listen. So I looked forward with some pleasant degree of anticipation to the conductor's approach to Wagner with the LSO. His readings did not entirely disappoint me, although (or because) they are not particularly traditional interpretations.

Butt opens the album with the Tristan und Isolde Prelude und Liebestod, which may seem a trifle odd a choice for a curtain raiser, its being so quiet a piece of music, yet it works well enough. Admittedly, Butt takes his time with the work, occasionally appearing close to leisurely; however, it's the kind of music that can benefit from a relaxed approach, and even if it never reaches the heights of ecstasy we hear in some other renditions, it is quite lovely in a dreamy, romantic sort of way. Besides, Wagner called the texts of his operas "poems," so it's entirely appropriate that Butt take the composer at his word and make the music sound as poetic as possible.

Next, we hear the Tannhauser Overture. Why not have started the program with it? Who knows. Whatever, Butt's tempos are again on the slow side, so the overture doesn't really get the adrenaline flowing. Regardless, it's a remarkably well-shaped performance and one that perhaps elevates the music beyond the mere showpiece we usually hear.

The third track is the Magic Fire Music from Die Walkure, which is just as lyrical under Butt as the previous numbers. As you can see, the first half of the program establishes a pattern for Butt's relatively gentle vision of Wagner. Whether that is what you want from Wagner is beside the point. If you're looking for something more vigorous, more dramatic or emotional, go with Solti (Decca), Szell (Sony), Tennstedt (EMI), Stokowski (RCA), Leinsdorf (Sheffield Lab), Haitink (Philips), Dorati (Decca), Boult (EMI), or Klemperer (EMI). 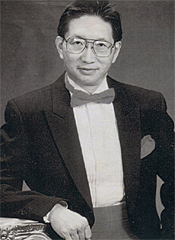 The Entry of the Gods into Valhalla from Das Rheingold comes after that. Here, Butt produces a very pastoral effect, soft and light, to introduce us to the grandeur of the closing. Although one might have hoped for a more majestic entrance at the finish, true to his poetic leanings, Butt doesn't quite come through with the power, relying instead on his more lyric course.

Butt closes the program with a balmy, sometimes melancholy picture of Siegfried's Rhine Journey; a reasonably moving and powerfully built account of the Gotterdammerung Funeral Music; and, not surprisingly given all that's gone before it, a fairly easygoing realization of the Ride of the Valkyries.

In all, these performances represent Maestro Butt's very special, very personal vision of Wagner's music. They are unconventional interpretations, to be sure, drawing out the noble, spiritual sentiments of the music, often at the expense of some of the more-familiar, red-blooded meat of the works. While the album may be a good antidote to the plethora of more histrionic readings available, it probably wouldn't function well as a one-and-only Wagner excerpts disc on a person's shelf.

Recorded at Henry Wood Hall, London, in June of 2011, the sound is quite good, with Nimbus Alliance providing the kind of clean, clear, realistic sound that EMI used to capture back in the Seventies with the LSO. This is natural, well-detailed sound, full, open, reasonably dimensional and dynamic, almost everything you can name that's good. Almost. OK, it's a tad soft and overly smooth, too, with a little less robust a bass as I'd like and a slightly veiled midrange. Still, it's some of the most listenable sound around and a pleasure on the ear.