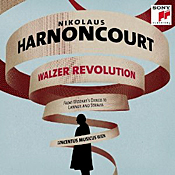 Austrian conductor Nikolaus Harnoncourt and his wife, violinist Alice Harnoncourt, formed the Concentus Musicus Wien in 1953, making it the oldest period-instruments ensemble still performing. Harnoncourt is principally responsible for the whole period-instruments, period-practices movement we enjoy today, so we have to pay attention when he produces any new recording, such as this two-disc set titled Walzer Revolution.

The idea behind the album is to explore the origins of the dance we now know as the waltz. No, like most musical forms, the waltz did not spring forth in full bloom as it exists in these times. Instead, the waltz has it roots in the formative musical models devised by people like W.A. Mozart, Johann Strauss Senior, and Joseph Lanner, the composers represented in this set. Presented in a more-or-less chronological order, the tracks on the two discs chronicle the development of the waltz from the late eighteenth century through the first half of the nineteenth. You'll find no Blue Danube here; that came much later. These are historically informed performances of much earlier music.

The first disc begins with three pieces by the fellow who seems to have popularized so much in the music world, our good Austrian friend, Wolfgang Amadeus Mozart (1751-1791): Kontretanz No. 1 KV 603, Kontretanz No. 1 and 4, KV 609, and Sech Deutsche Tanze, KV 571. The first examples of contredanses don't seem to have a lot to do with modern waltzes, but listen closely and you'll hear the familiar lilting cadences developing. While the six German dances that ensue have an especially "Turkish" flavor to them that Mozart apparently intended in disdain of Turkey (Austria was at war with Turkey at the time), these days we find them delightful.

Harnoncourt follows the Mozart pieces with music by Johann Strauss the Father (1804-1849), starting with the familiar Radetzky March. Only, like most of the music here, it isn't quite as we might remember it. You see, Harnoncourt plays all the music in the set from original manuscripts, some of the pieces getting world-premiere performances. The conductor plays the march with great fervor, using the earliest sources. Its connection with the waltz form, though? Tenuous at best.

Not so, however, with the more obvious Strauss Sr. choices: the Chain Bridge Waltz, the Shepherd's Quadrille, the Carnival in Paris, and the captivating Paganini Waltzes. All of these Strauss pieces sparkle with a luminosity that is hard to resist, especially the Paganini. 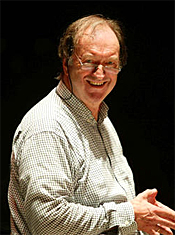 Disc two contains nine dances by yet another Austrian composer, Joseph Lanner (1801-1843), a direct rival of Strauss Sr. in the early nineteenth century. Together, the two composers pretty much set the pattern for and cornered the market on both danceable and concert waltzes. Lanner's melodies are, if anything, even more charming than Strauss's, beginning with the Pas de Neuf nach Saverio Mercadante with its wonderfully light gait. Hexentanzwaltzer is also a fascinating piece of business, and the concluding Die Schonbrunner Waltz sounds as though Strauss Jr. had written it. It's all quite pleasant, and, done up on period instruments and played from period manuscripts, quite enlightening.

Sony recorded the Concentus Musicus Wien at the Musikverein, Vienna, Austria, in June of 2011, and the sound they obtained is excellent. Dynamic contrasts are strong; the stereo spread is wide; transient response is quick, particularly during drum attacks; and highs appear well extended, the triangle ringing out clearly and cleanly. The miking is moderately close up, providing good detail but not the best sense of orchestral depth. And there is a slight forward edge to the upper midrange. Nevertheless, the sonics are quite robust, exhibiting a nice resonant air to the acoustic, and when you consider the exuberance of the playing, the result is very attractive, indeed.

The "however" in all this is that Harnoncourt is not the first musician to have essayed the development of the waltz through Strauss Sr. and Lanner. Other groups, like the Biedermeir Ensemble Wien (a quartet recording on Denon), have made similar recordings that include many of the same pieces of music. Still, Harnoncourt's historical approach is different from most of the rest, so perhaps the point is moot.