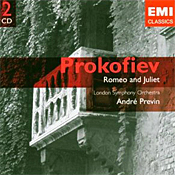 I suppose all classical-music lovers have their favorite conductors and maybe even their favorite orchestras, which often constitute a fair share of their record collections. Among others, my favorites include Reiner and the Chicago Symphony (RCA), Klemperer and the Philharmonia (EMI), Beecham and the Royal Philharmonic (EMI), and Andre Previn in his years with the London Symphony (EMI). Of course, Previn's repertoire back then was much more limited than Reiner's, Klemperer's, or Beecham's, but Previn's output with the LSO was amazing just the same. Hardly anyone has surpassed his Gershwin, Holst, Mendelssohn, Orff, Prokofiev, Rachmaninov, Saint Saens, Shostakovich symphonies, and Tchaikovsky ballets from the LSO period.

Such is the case with Previn's rendition of Prokofiev's Romeo and Juliet, the complete ballet on two discs. Coincidentally, Decca released a competing version the same year, 1973, with Lorin Maazel and the Cleveland Orchestra, and in the old LP days I owned both of them. However, when CD's came along I decided one version was enough and bought the Previn. I have heard any number of recorded excerpts and suites since then, as well as other complete recordings from people like Gergiev and the Kirov Orchestra on Philips and Ashkenazy and the Royal Philharmonic on Decca, but none of them have struck me as being as well balanced musically and sonically as Previn's view of things.

Previn's interpretation leans heavily toward the romantic side of the story, the lyricism of Shakespeare's words and the impetuous love that starts the plot in motion. It's a beautifully graceful account of the lovers' meeting and eventual conflict, yet with plenty of color and atmosphere, too. If it's not as hard-hitting, as biting, or as melodramatically exciting as Maazel's, well, think about the play. The first two acts are joyful and uplifting, the middle is gloom and doom, and the ending is pure sentimental corn. Previn nails down the beginning and the end, which if you were an oddsmaker would give his version the edge in betting circles for covering more ground better than anybody else's. 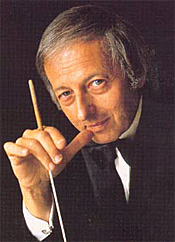 The sound holds up well, too, being in that class of EMI audio that tends never to appear flashy or subdued or bright or dull. It's perfectly natural, if not quite so sharply defined as several later digital recordings.

However, for those people like myself, the sound, ironically, may also be this particular release's only drawback. You see, EMI used the same mastering for this 2005 release that they used for their first compact-disc release years before, and try as I might I could not hear any significant differences between the newer CD's and the older ones. I wish they had remastered it using the Abbey Road Technology (ART) system, as they have for so many other classic performances in their "Great Recordings of the Century" series. However, it was not to be; this one is in their budget-priced Gemini line (having gone from full price to mid price "Double Forte" and now to low price). Still, if you don't already own this set, various sources are offering it so cheaply it should be an irresistible buy. So maybe Previn's music making will reach more people this way. Let's hope.